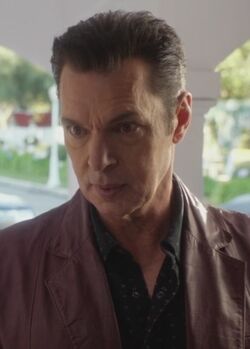 Donny was a loan shark-turned extortionist whom Ben turned to when he needed money to support his real estate development site. Donny is extremely willing to give revenge, even for the smallest inconveniences given to him by others, hence the murder of Mike Delfino.

Due to the fact Ben is unable to pay Donny back, Ben's girlfriend, Renee does something risky. Deciding to protect Ben, she chooses to pay off all of his debts after he collapses from the stress Donny is forcing upon him. Ben tries to warn Renee not to pay him, because he knows that he won't leave them alone. Renee ignores Ben and goes ahead to pay the debt. Donny leaves Renee's home talking suspiciously about her house, without Renee appearing to have a second thought. He returns to her home, threatening and teasing that he may decide to actually burn down her house. Renee, nearly fearless from her New York childhood, brushes it off and tells him that their conversation is over, closing the door in his face. Donny does leave, but not before saying "I decide when we're done here". Renee looks on, worried.

A few days later, Mike is parking his truck on the road while talking to Renee, who is at the hospital with Ben, on the phone. He sees a light turn on in Renee's house. Becoming suspicious, Mike, already knowing about Donny, makes his way over in time to see him breaking Renee's furniture and dropping precious antiques on the ground. After exchanging insults, a fight erupts with Donny barely leaving with his life. Donny promises he'll be back for Mike and leaves. This makes Mike extremely paranoid, even making him get one of his old guns from his times as a hitman to carry around. He and his wife Susan go to the police, asking for police protection. The police say they can merely send a squad car to watch over their house every once in a while.

One day, while sitting outside, Susan decides to come see him. They talk about Mike's paranoia, but the conversation ends with Susan telling Mike how much she loves him, as she thinks he would do anything for his family. This proves to be extremely ironic, as they stand up and kiss, when suddenly someone shouts "Delfino!" and a car stops in front of the house. Mike pushes Susan into the house, knowing that it's Donny. The episode suddenly freezes while flashbacks play of Mike and Susan meeting, getting married, learning that she is pregnant, the birth of their child, and the time he saved their lives. Time resumes to normal, and Mike is shot in the heart and falls to the ground, blood gushing out of his wound. Susan tries to see if he's still alive, but he was literally dead before he hit the ground. Susan grieves in despair while the camera zooms out on her hugging Mike with blood pouring down his shirt onto the ground.

In the next episode, it's implied that Donny has been arrested as the police officer who takes Bree down to the station says they have, "made an arrest in that case."

Retrieved from "https://desperatehousewives.fandom.com/wiki/Donny?oldid=87068"
Community content is available under CC-BY-SA unless otherwise noted.