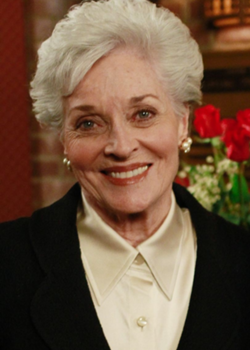 Doris was the elderly aunt of Detective Charles "Chuck" Vance, who attended his funeral and offered consolation to a wheepy Susan Delfino in the episode "What's to Discuss, Old Friend?".

At the entrance to the church where Chuck's memorial is being held, a large photo of Detective Vance is seen, and a teary Susan Delfino is standing in front of it, whiping her eyes with her sleeves. Doris, Chuck's elderly aunt, approaches her and lends her a package of tissues. Susan takes one, thanking her for the gesture, and comments that she can't believe she forgot to bring tissues to a funeral. She then hands the package back, but the woman tells her to keep it, as she doesn't really cry at funerals anymore. As Susan whipes her eyes with a tissue, Doris tells her that when one is young, death always comes as a shock, as if the Universe is unfair, but when one gets to her age, they realize that death is just the end of the story. Susan sighs, with sympathy, and Doris exemplifies that the phone call comes (this triggers something inside of Susan), one sheds a few tears, and then people get together and celebrate the life that was. Susan tells her "That's it". She then says, "Thank you so much. You will never know how helpful you've been." Doris tells her she's so glad, and then asks if Susan was close to her nephew. Susan dismissively says "No", which surprises and confuses Doris, but she then adds that Chuck interrogated her once, and he did a lovely job. Susan then rushes inside, leaving a slightly disgruntled Doris behind, who immediately looks at the large picture of Chuck, in his cop uniform, and smiles. ("What's to Discuss, Old Friend?")

Retrieved from "https://desperatehousewives.fandom.com/wiki/Doris_(8.10)?oldid=74639"
Community content is available under CC-BY-SA unless otherwise noted.