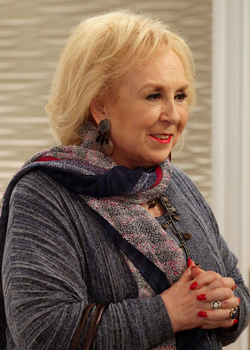 At Cumberly's, Gabrielle is busy working. She chooses a black cape and places it on the shoulders of Mrs. Duncan, one of her many clients. As Mrs. Duncan admires herself in a nearby mirror, Gaby spots Doris enters the store. Thinking the woman is from the "land of elastic waistbands", Gaby approaches Doris and suggests she look for the 'sensible shoes' department. Doris explains her situation - she is in need of a personal shopper as she wishes to spend the money of her deceased husband. It transpires that Doris' late husband was William Hammond, the extremely wealthy owner of Fairview's local hospital, theater and library, which impresses Gaby. Doris spots the cape Mrs. Duncan is wearing and adds, "That looks interesting." Gaby dashes over to Mrs. Duncan, snatches the cape from her shoulders, and gives it to Doris. Gaby decides to become Doris' personal shopper.

Later, as Gaby slaves away in her kitchen, Carlos arrives home from work, and asks "why is there is an old lady sitting at our dining room table?" Gaby explains that their elderly guest is a wealthy widow who has just become her latest client. Carlos realizes that his wife is attempting to exploit Doris in an plan to make money off her. "Exactly," Gaby bluntly replies, as she hands Carlos a pot containing dinner. Gaby orders Carlos to get out there, loose the top button of his shirt, and look pretty. At the table, Gaby tries to make conversation with her client, and makes the mistake of asking a disinterested Carlos his opinion on Doris' new coat. From there, Doris and Carlos get talking about his work in charity, which Gaby begins to make fun of. "You'll have to excuse my wife," Carlos explains, "She's not the biggest fan of what I do." Doris starts to side with Carlos and reminisces about how her deceased husband was an excellent philanthropist and gave to charity generously. Carlos' face lights up. When Gaby excuses herself to go and prepare coffee, Carlos suggests Doris continue her husband's legacy but Doris is reluctant, as she has no idea where to begin. "Maybe I could help?," Carlos replies.

The tomorrow, Gaby is at work. Doris arrives and Gaby immediately stops her current task and rushes over to greet her client. "I've had a change of heart," Doris begins, "I can't buy anything more from you. In fact, I need to return these." Gaby is handed several bags of clothes from her client and is horrified that she wants to return them - Gabrielle works on commission. Doris explains that she can put her money to better use by donating to charity after speaking to Carlos on the phone earlier that morning. Gabrielle is furious.

The next day, Carlos is meeting with Doris about her charity work. The two walk to his office. Once there, Carlos says, "Please excuse the appearance of my office. All the money we get goes directly to those in need. So, there's not a lot left over." He opens the door. Inside, the room has been elegantly decorated with antique furniture, exquisite decorative paintings, a glass chandelier and a baby grand piano. "Those in need, huh?," an unimpressed Doris exclaims. Carlos explains that none of this is his stuff but Doris does not believe him. She admires the piano, as Carlos pleads with her. "Find yourself another old lady to fleece!," Doris screams, as she leaves his office, angrily.

Carlos confronts Gaby. He is furious about what she did to his office. "I guess I'll call Doris now and make an appointment for shopping tomorrow," Gaby mocks. The two begin to argue. Carlos reminds his wife that he wanted Doris to do something that mattered. "Oh, enough with the Carlos of Nazareth act. This wasn't about helping people. This was about you smelling money and going after it," Gaby exclaims. Carlos informs her that the money was for the center not for him. Gaby chuckles at this remark and adds, "The center? Please, you were doing it to win! And you know why? 'cause you're a shark, Carlos. You always have been and you always will be. It's your nature." Carlos is hurt by Gaby's words. ("Lost My Power")

1 of 7
Add photo
Retrieved from "https://desperatehousewives.fandom.com/wiki/Doris_Hammond?oldid=86874"
Community content is available under CC-BY-SA unless otherwise noted.