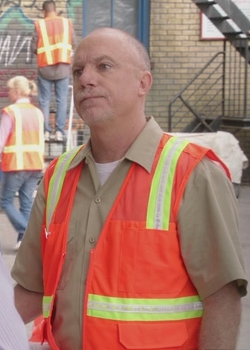 Doug is a community service supervisor who watched over Susan Delfino.

In a rough part of Fairview, Susan is wearing an orange high visibility jacket as she paints over some graffiti on a wall. Doug tells Susan not too drip paint, as its wasting money. He then tells her to hurry up, as she needs to paint over a “banana” on another wall, but Susan awkwardly points out that it isn’t a banana. As he leaves to investigate, Carlos approaches Susan, and jokingly tells her that he worked hard on the graffiti she was painting over. Susan joyfully asks what he was doing, so he says that he started reading To Kill a Mocking Bird, and that he couldn’t wait to talk to her about it. She says she can’t as she’s “beautifying the city”, so Carlos asks if she gets lunch. However, explains that Mike found out about them both, and says he feels weird about it so they shouldn’t have intimate lunches. Carlos asks why he’s weird because nothing’s going on. She then explains that them both meeting in the night and lying about it made a “red flag”. Carlos then offers to help with the “beautifying” so they can talk; however, as he picks up a vest, Doug returns and asks if Carlos is doing community service. Carlos says that he’s just being a good citizen, but Doug tells him he cannot help unless he committed a crime. Carlos asks if Doug is serious, which he is… Carlos takes a piece of paper off Doug, crumples it up and throws it on the ground. Doug then passes Carlos’s vest back, meaning he’s now on community service for littering. ("Watch While I Revise the World")

Retrieved from "https://desperatehousewives.fandom.com/wiki/Doug_(8.03)?oldid=77312"
Community content is available under CC-BY-SA unless otherwise noted.