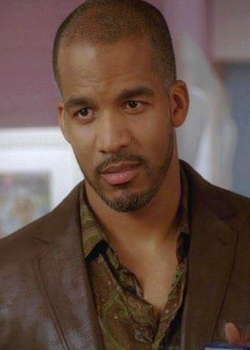 Doug Perry is the ex-husband of Renee Perry. He is a Major League Baseball player from New York.

At some point in his life, Doug met Renee and married her. Soon after, the two moved to New York City together, somewhere down the line Doug cheated on Renee with his agent's assistant, Tina. Then, they had a separation, before divorce proceedings' began. They were married for eight years. It was at this moment Renee decided to go to Wisteria Lane, where live her old friend, Lynette. ("Remember Paul?"/"Who Can Say What's True?")

Renee opens the door to find Doug holding some roses. He explains that he misses her and describes his affair as a "stupid mistake". He asks her to give him another chance. Renee insists that she is happy in Wisteria Lane but Doug tells her that she was made for Manhattan. The tomorrow, Renee arrives at Bree's and announces that she is going to get back together with Doug. Gaby tells her not to get back together with him, pointing out that Doug cheated on her. However, Renee replies: "Keep your fake nose out of it.". Gaby storms out, warning Renee that she will regret revealing the secret.

Later, at the bar for Emma's cabaret night, the barman asks a waitress to give a bottle of champagne to Doug, and Gaby offers to take it over. Drunkenly, she gives Doug and Renee the bottle and adds: "By the way, she slept with your lawyer. Enjoy the show." Doug is shocked by the revelation, and leaves. The next day, Renee is at home when Doug rings. He suggests that as they have both slept with someone else, they should call it even and get back together. "It's what we both want, right?" he says. Later, Renee and Gaby approach each other to apologise. Renee reveals that Doug called to ask her to come back, but she turned him down. She admits that Gaby was right about him and thanks her for being so honest. ("Let Me Entertain You")

During Susan's story, Renee's cell phone rings, and she says it's her ex-husband Doug, who she says has probably been dumped by his girlfriend and now wants to get back together. She ignores the call. But, Renee's cell phone rings again, spoiling the moment for the second time around. She tells them they don't need to stop, for she's not going to answer the phone. Later, Renee is lighting scented candles in her place for the opening part of the progressive dinner. Lee and Bob arrive. Lee tells her she looks amazing as she greets them, and Bob tells her it's good to see her holding up so well. Renee asks him what he's talking about, and he says he's referring to Doug remarrying, a piece of news that is all over ESPN. Renee is shocked and confused, and Lee realizes she didn't know. Renee realizes that's why he's been calling, he's getting married. She goes drunk at the bar. ("Come on Over for Dinner")

Retrieved from "https://desperatehousewives.fandom.com/wiki/Doug_Perry?oldid=88322"
Community content is available under CC-BY-SA unless otherwise noted.