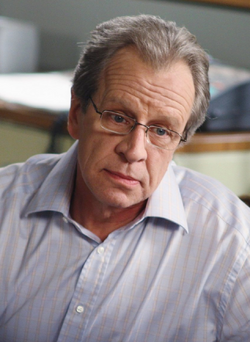 Dr. Brent Avedon was a well-respected Fairview doctor, who treated Katherine Mayfair after she had a nervous breakdown. He later helped her when she discovered she was a lesbian/bisexual.

Dr. Brent Avedon is introduced by Mary Alice as one of the most respected therapists in the town of Fairview. He attended Eagle State University - School of Psychology before getting hired to work at the Fairview Meadows Psychiatric Hospital, wherein he helped Katherine Mayfair overcome her nervous breakdown, that lead her to be admitted in after stabbing herself to frame her ex-fiancée, Mike Delfino. Dr. Avedon tries to get Katherine to talk about her dellusions prior to her detainment, and she tells him about how after losing Mike to Susan she started fantasizing about having him around, and eventually those stories she concocted in her head overwhelmed her, and she started to let go of reality because the illusion was far more satisfying. She then tells him she feels better now, and worst as well, because she can see how her life has turned up and how much she destroyed it. ("How About a Friendly Shrink?")

Later, Katherine discusses with Dr. Avedon the fact that she is developing strange romantic feelings towards her new roommate, Robin Gallagher, feelings that don't sit right with her because she doesn't think of herself as a lesbian. Dr. Avedon warns her that before she tries to focus on her sexual orientation and dating she must first get better, completely overcome her mental issues. This is to no avail, as Katherine engages in sexual intercourse with Robin in the very same episode. ("The Chase")

Retrieved from "https://desperatehousewives.fandom.com/wiki/Dr._Brent_Avedon?oldid=74392"
Community content is available under CC-BY-SA unless otherwise noted.