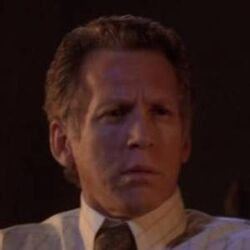 Dr. Samuel Heller was a psychiatrist, who worked with the criminally insane.

After losing his wife and daughter in a car crash involving Susan and Mike Delfino, David Dash goes out of his mind and becomes a patient of Dr. Heller. After meeting Edie Britt, Dash realizes his chance to get back to Fairview to get his revenge for the man who's responsible for the death of his family. He changes his name to Dave Williams and keeps frequent contact with his psychiatrist, however plotting all the time.

When Dr. Heller discovers that Dave has changed his name to Dave Williams, and returned to Fairview to live, he becomes very concerned about what might happen. He comes to Fairview looking for Dave, and meets Edie Britt who provides information on where Dave will be. Dr. Heller confronts him at the White Horse battle of the bands but is tricked by Dave into giving him another chance but then finds out Mike is in the band. Dave strangles him to death, and sets the club on fire.

It would be several months before the body is identified, prompting Karen McCluskey and her sister Roberta to put all the pieces together of Dave's revenge plan against Mike and Susan.

Retrieved from "https://desperatehousewives.fandom.com/wiki/Dr._Samuel_Heller?oldid=85776"
Community content is available under CC-BY-SA unless otherwise noted.