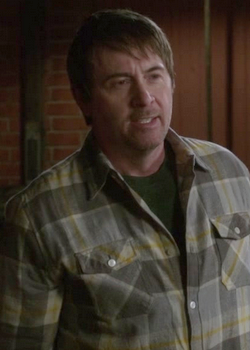 Dylan is the skeezy guy who tried to hit on Bree Van de Kamp and later assaulted her at a local bar in the episode "Is This What You Call Love?".

Bree is sitting alone at the counter in her favorite bar, looking rather mopey, and the bartender approaches her and asks if she'd like to have the usual. Bree smiles at him, acknowledging that it has indeed became her "usual", and confirms. Immediately afterwards, a skeezy man named Dylan approaches and greets her, and Bree is - right away - clearly not interested, and he delivers a cheesy, unappealing pick-up line: "I got a thing for redheads... wanna see it?". Bree is repulsed, as Dylan chuckles at his own line. He sits down next to her, and reveals that he knows her name. Bree tells him she only came to have a drink, she really doesn't feel like talking, but Dylan isn't willing to give up on her, explaining that it wasn't the chance to have a conversation that brought him over. Bree is offended, but Dylan retaliates that he knows what she comes there for, so they can just stop the game. Bree says, "We can stop everything, including this unfortunate encounter. Now, please leave me alone." She turns her head away from him, in disgust, and he laughs condescendingly at her attitude, asking if all of a sudden she thinks she's a high-class lady. "Give me a break. Everybody in this bar knows what you are.", he adds. The bartender asks Bree if she would like to start a tab, but she tells him no, as she'd like to go. She leaves the bartender a bill and walks away.

Outside, Bree reaches for her car keys, but drops them. Immediately, Dylan grabs them before she can, and tells her, with a smirk, that he'll drive. An angered Bree tries to steal the car keys back from him, but he won't let her. She asks for her keys back, but all he does is wonder why he doesn't "make the cut", considering all the 'dirtbags' she's dragged out of that bar before. Bree tells him he's vile, and demands that he give her her keys and get away from her. Dylan says, "Wow... this is a new low for me. I'm not good enough for the town pump." Bree slaps him across the face, and he is livid. He then says, "You know what? I think we'll take my car.", and he then grabs her by the arms and forces her to come with him. Bree is horrified, as she tries to break free from his grasp, and he teases her about how he likes to play rough as he tries to get the door to his car open. Bree tells him to let go of her, and a voice says "You heard her." It's Orson Hodge, who's just showed up in his wheelchair.

"Let go.", he adds. Bree is surprised to see him, and Orson greets her and says they'll catch up later on. Dylan keeps trying to get his car's door open, and Orson, taking out his gloves, tells him, "If you're smart, you'll step away from her and go back to the hole you crawled out of." An angry Dylan tells him he has a rule about not hitting men in wheelchairs, but Orson deserves an "asterisk". He lets go of Bree and walks up to Orson, prepared to strike him, but Orson takes out a taser gun and shoots Dylan with it, incapacitating him. Dylan is dropped to the floor as he begs to be released, and Orson obliges. When Dylan runs off, Orson reveals that he's also got pepper spray.

Retrieved from "https://desperatehousewives.fandom.com/wiki/Dylan_(8.13)?oldid=73651"
Community content is available under CC-BY-SA unless otherwise noted.