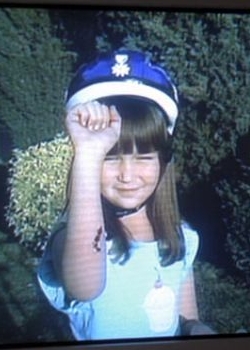 Dylan Davis is the deceased, biological child of Katherine Mayfair and Wayne Davis.

Dylan Davis was the daughter of Katherine Davis and Wayne Davis. In 1995, when Mary Alice was baby-sitting her, Wayne came to see Dylan. Of course, Mary Alice didn't see this as a bad thing because he got her a china doll and a bike. When Katherine came home with Aunt Lilly, Katherine took it a put on a tall hutch. While Katherine was asleep after a fight with Wayne, Aunt Lilly finds Dylan's cold arm sticking out of the hutch, which is broken and on the floor, on top of Dylan, meaning Dylan was awakened by Katherine and Wayne's fighting, and accidently crushed herself on the shelf in an attempt to get her doll. Katherine and Aunt Lilly buried her in the woods because they knew if they went to the police, Wayne would have made it seem as If Katherine killed Dylan on purpose to Wayne couldn't see her. Katherine then devises a plan to make sure Wayne wouldn't know about the accident. She went to a Romanian orphanage and found a girl who was almost identical to Dylan, adopted her, passed her off as the original, and fled to Chicago. The 'New' Dylan never knew about this until Katherine planned to run away again.

Retrieved from "https://desperatehousewives.fandom.com/wiki/Dylan_Davis?oldid=88984"
Community content is available under CC-BY-SA unless otherwise noted.