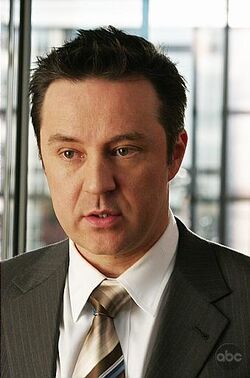 Ed first appeared in "Next". He hired Lynette against Nina's wishes because he liked her ideas. He fired several people in "That's Good, That's Bad" after Stu's sexual harassment lawsuit set the company back.

He later gave Tom a job at the company in "There's Something About a War". The two bonded in "Silly People" when Ed used Tom for his amusement by betting him to do things including eating a doughnut out of the toilet. This led to Tom being known as "Toilet Boy" throughout the advertising world. Lynette put a stop to these games and created a more "business-like environment" when she ate an entire package of raw meat as a dare from Ed.

To avoid another late night at the office, Lynette tries to help Ed with his marital woes in "It Wasn't Meant to Happen". She convinces him to send sexy messages to his wife via instant chat, but he asks for help during a conversation between the two and Lynette is forced to write the rest. When Fran figures out it wasn't Ed who sent the messages, she tells him to fire the person responsible or she'll call a divorce lawyer. Ed tells her it was Tom and, in "I Know Things Now", he hires a forensic accountant to find cause to fire him. Later, Tom punches him in the face and Ed tells Lynette that Tom has been taking trips to Atlantic City and buying show tickets and flowers.

Ed's last appearance is in "Come Play Wiz Me".

Retrieved from "https://desperatehousewives.fandom.com/wiki/Ed_Ferrara?oldid=87283"
Community content is available under CC-BY-SA unless otherwise noted.