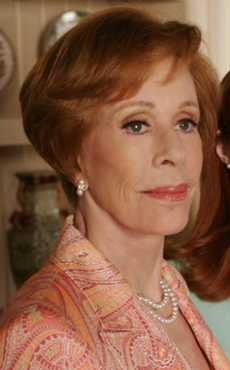 Eleanor Mason is Bree's uptight stepmother. A proper lady to whom appearances mean everything, Eleanor visits Wisteria Lane in "Don't Look at Me" to mediate between Bree and Andrew.

Eleanor and Bree had never had a good relationship, with Bree once commenting that she had to "work for every kind word" her stepmother had ever said to her, and Eleanor retorting that she had always known Bree "resented her because of her high standards", and even made a hurtful remark about Bree's peanut butter cookies.

Despite this, Eleanor did seem to have a tiny amount of sympathy for Bree, confessing that she had always admired her determination, and that she would like to be a lying, supportive mother, but it was simply not in her nature. She also appeared to share a close relationship with Andrew and Danielle - though she was not their biological grandmother, they still refer to her as "Grandma".

Eleanor's and Henry's (Bree's father) intended to take Andrew back with them to Rhode Island due to his dispute with Bree, who pulled a few stunts to sabotage this plan, and was ultimately successful through the revelation that Andrew was a homosexual. Eleanor and Henry later left, and had not been seen since.

Retrieved from "https://desperatehousewives.fandom.com/wiki/Eleanor_Mason?oldid=89774"
Community content is available under CC-BY-SA unless otherwise noted.