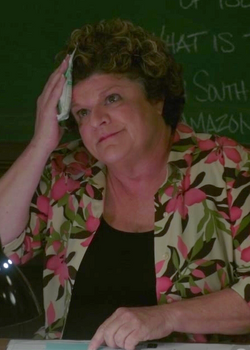 Elenora Butters was the Scavo twins' 1st grade teacher, as well as the teacher for MJ Delfino.

Ms. Butters is a public elementary school teacher. She taught Porter and Preston Scavo in their first grade, though not in its entirety. Ms. Butters had the twins in her class because she was the only teacher in the school who could control them, at least to some extent. Which means that they still manage to roughouse every now and again. Their mother, Lynette, gets called up to school one day because the twins had opened up the paint supplies and painted a girl entirely in blue. Ms. Butters then suggested to Lynette Scavo that she medicate her children for attention defficit disorder, something she had done before, but Lynette had refused to, rather aggressively. She makes a counter-offer, suggesting that the kids be split into different classes, as they are much more well-behaved solo. Ms. Butters tells the mom they can try that, but if it doesn't work, they'll probably no longer be able to accommodate the rowdy twins. The following day, Lynette returns, having been called up from school again, to learn that the twins don't want to be separated. This prompts Lynette to try the tactic Ms. Butters had suggested, but to no avail. Ultimately, she just decided to enroll them in a private school. ("Who's That Woman?")

Ms. Butters served as MJ Delfino's teacher (which would only be so for a short period of time as well). She hosted a parent-teacher night in which the kids displayed drawings they'd made of their domestic life, which often depicted their parents in less than flattering situations. When Mike Delfino, MJ's dad, arrived, late, he managed to get there in time to see MJ's drawing, and make assumptions that the strong man standing there, along with his then ex-wife and son, is him. However, MJ explains to him that it's actually Jackson, his mom's then boyfriend. Susan is embarrassed, and Mike is frustrated, particularly when Ms. Butters asks who Jackson is, and little MJ explains to her that it's a friend of mommy's who she has sleepovers with and with whom she drinks lots of wine. Susan explains to the baffled teacher that she and Mike are divorced, and Ms. Butters can't help but smile at yet another embarrassing situation brought on by children's drawings. ("Back in Business")

At Susan’s house, Susan is in the kitchen when she gets a phone call about MJ doing something at school. A while later, at MJ’s school, Susan is in a classroom with Elenora Butters, one of the teachers after being told what happened. Susan is shocked to hear MJ threw a stapler at Elenora’s head and she insists it must have been an accident, but Elenora quotes MJ stating he wanted to throw the stapler at her head. Susan apologizes and then explains that MJ just lost his father. Elenora admits she knows and gives her sympathy, but explains there’s no room for violence in her classroom, no matter what the circumstances are at home. Susan is disgusted by her choice of words and reminds her that MJ lost his father. Elenora tells Susan if MJ hit her any harder, her grandchildren may have lost their grandmother. Susan tells Elenora she’s sure MJ is sorry, but Elenora assures her he isn’t because he showed no remorse. She then tells Susan she’s considering removing him from her class. This angers Susan as someone who spends so much time with children is oblivious to a child’s pain. Elenora explains there are other students to protect, and MJ is an angry little boy. Susan yells, admitting he’s angry because he’s never going to see his father again. Elenora tries to calm Susan down, but this only angers her more and she yells that his father and her husband is dead. Susan suddenly throws all the items on Elenora’s desk onto the floor, hurting Elenora’s foot; she regrets it immediately. ("Any Moment")

Retrieved from "https://desperatehousewives.fandom.com/wiki/Elenora_Butters?oldid=84335"
Community content is available under CC-BY-SA unless otherwise noted.