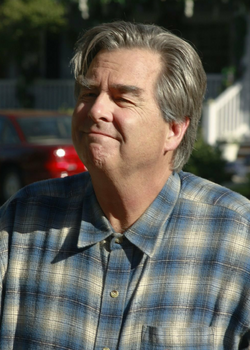 Eli Scruggs was the handyman for many residents of Wisteria Lane. Throughout the lives of his friends, he managed to help every one of them in a different way. While completing his last job before retirement, Eli had a heart attack and died.

Despite appearing in just one episode, Eli Scruggs had been a part of the residents lives and had been working as their handyman for many years.

Eli first met Mary Alice Young while she was gardening. He told her that if he ever needed a handyman then he was looking for some work. When Mary Alice first rejected him, she saw some holes in his shoes. She then told him she had a vase which needed fixing, he told her she didn't have to give him work but she insists he does so.

Later on, while doing work for Edie Britt, he witnesses from another room Edie and her then husband Umberto arguing about sex. She demands that they have afternoon sex as they haven't had sex in two weeks, Umberto tells her that she is too clingy and that her need for sex is out of control he then takes off for the gym and she falls in her lingerie on the bed. Eli emerges from the room and Edie screams after forgetting he was in there. Before Eli takes off she asks him for his opinion on her breasts and legs as she's wondering if its her. Eli tells her its not her that's not causing them to have sex as he claims he used to work in construction and that his old workers would have gone crazy for her and yelled cat calls at her. Edie finds this insulting and demeaning yet she thanks Eli for making her very happy.

When he nexts visits Edie he discovers her drinking on the bed, she is upset and confesses that Umberto was gay and Edie was the one who convinced him that he liked men. Eli cheered her up and told her she was a catch. Edie then kisses Eli and pushes him onto the bed - he asks if she's sure as he wouldn't want to take advantage of her. Edie rips off her top and they have sex.

Eli is seen putting in new windows across the street and he notices Lynette Scavo get out of her car with groceries and busy chatting away on the phone but Eli is shocked to see Lynette had left her baby Penny in the car. Eli gets her out and takes her to Lynette who is speaking about a very important job offer, Lynette begins to cry when Eli comes in with Penny telling him its baking hot outside and that she's never done anything like it before. Eli tells her its understandable and that's got a lot on her mind with three kids, a new baby and a new job. Lynette then realizes Penny should be her main focus she gives Eli a hug and a peck on the cheek and then hangs up on her associate.

Eli is then next seen in new neighbors at the time Gabrielle and Carlos Solis's kitchen. He witness Gabrielle moan at Carlos for always being at work and leaving her claiming the town is "boring and suburban". Carlos tells her hes going to pack for a business trip. Eli tells Gabrielle that the women in the street are very nice and that he could see if he could get them to allow her to host a poker game. Eli later visits Gabrielle and tells her that she made an awful first impression acting like she was better than the other housewives he tells her to cut the attitude and learn to like her neighbors or she would end up being all alone. Gabrielle then goes to them and apologises and she makes her friends for the next years of her life.

Susan Mayer is next seen with Karl next and he tells her he's sorry when she hears that her husband, Karl Mayer, has left her for his secretary, Brandi, and she asks Eli to change the locks. Eli does so and tries to cheer up Susan by telling her that red heads are normally trouble anyway and that she was slightly chubby. Susan looks confused and tells Eli that Brandi is blonde she then realizes Eli had seen Karl with yet another woman before Brandi, Eli sincerely apologizes saying he thought she already knew. Susan asks him to change the locks and then leave.

Eli is seen fixing the sink of Rex Van de Kamp he asks his wife Bree whats for dinner she tells him that they're having left overs. Rex who is confused asks her since when did they have left overs and Bree confesses shes been writing her own cookbook. He doesn't have any faith in her and tells her to stop the nonsense and make her some dinner and that if she wants too he'll get her a new stove. Bree clearly upset throws the cookbook away as Eli looks on.

One afternoon Eli walks into Mary Alice's house and finds her sitting at the table with obviously something bothering her. Eli tries to talk to her but Mary Alice interrupts him and shows him the vase he had first fixed for her. Eli thanks Mary Alice because due to her introducing him to all of her friends his business could not be better she smiles and said shes very glad. Mary Alice then tells Eli to keep the vase as a thank you from her then asks to be left alone. Eli leaves and later on Mary Alice kills herself. As her friends and neighbours stand outside her house deeply upset over their friend's death - Eli is seen near his van watching devastated he did nothing to help her. He closed his eyes and made a vow to God that he would do everything he could to help other people.

After Rex Van de Kamp's funeral Eli visits Bree and tells him he was at the service and said it was really nice. Bree thanks him sweetly and Eli gives her the cookbook she had thrown away years ago and Bree is delighted but tells him shes not in the mood to write a cookbook, Eli tells her that perhaps one day she will be. Bree indeed years later does so and becomes a top selling cook book author making her extremely wealthy and popular.

Eli later develops a close bond with Susan when he sees her breaking down sobbing when she and Mike divorce - Eli tells her he hasn't had much experience in love but had dealt with it a few times and he tells her that she is heroic to him because no matter how much heart break she suffers she always continues to find true love and never gives up hope. Susan hugs Eli and he comforts her as she cries.

On his final day Eli visits Susan who informs him that she and Jackson have broke up. He sees Susan as now strong and independent and doesn't always need a man to make her happy. Eli informs her its his final day as handyman and that after that day he was retiring and off to holiday in Hawaii. Susan tells him that shes gonna miss him because he has been the most consistent male relationship throughout her life which she finds crazy because she knows nothing about him. Eli tells her that he will fix some tiles on her roof and that when she gets back from the store they can have a drink together where Susan can ask him anything. Susan heads out to the store. Karen McCluskey arrives and tells Eli she receives his note that he is retiring shes disappointed as hes the best handyman shes had and he never leaves a mess and that it took her ten years to trust him. She says goodbye and as he climbs his ladder for the last time and fixes his last job he has a heart attack and passes away.

All the ladies, Gabrielle, Edie, Bree, Lynette and Susan, all reflect on how Eli had helped them get where they are today. Eli is buried on a Saturday. Bree fixes a flower which had come loose on his coffin, she says she wanted to fix something for Eli for a change. A voice over of Mary Alice then reveals that in a place reserved for only the very best of people, Eli smiled and said "Thank you".

Retrieved from "https://desperatehousewives.fandom.com/wiki/Eli_Scruggs?oldid=89620"
Community content is available under CC-BY-SA unless otherwise noted.