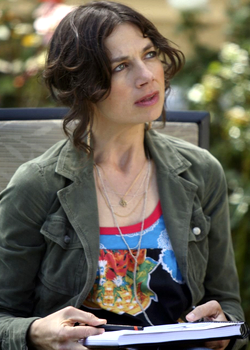 She tells Gabrielle that she is an Art Student and that she is going to school trying to better herself.

It doesn't take long for her to draw suspicion when she is seen having different men with her all throughout the day. Gabrielle at one point witnesses Ellie receive a handful of cash from one guy. Immediately she jumps to the conclusion that Ellie is a hooker and convinces the neighborhood gay couple, Bob and Lee to catch her in the act.

This fails miserably and Ellie is offended that Gabrielle thought she was a hooker, so she "comes clean" and tells Gabrielle that she is a tattoo artist and that she was giving those men tattoos.

Gabrielle soon finds out that Ellie was lying when she finds cocaine and a scale underneath her bed. When she goes to the Police they inform her that they are onto her and not to say anything so they can find out her clients.

Soon Gabrielle and Ellie grow close and she decides to let Ellie know telling her to escape as the sting comes to an end. She later informs Gabrielle that her father gave her a teddy bear and that she left it in the closet.

When Gabrielle finds it she opens it to reveal a hefty amount of cash. Ellie realizes Gabrielle is lying when she says she can't find it, and threatens to splash her face with acid if she doesn't give the money back.

After breaking in and struggling with Carlos and Gabrielle she narrowly escapes the police by running to the nearby commitment ceremony of Bob and Lee. She takes refuge in the nearby Mayfair house. This proves to be a fatal mistake.

Wayne Davis has Katherine Mayfair at gunpoint and as Ellie enters she grabs a knife and tells Wayne to let her hide there. Wayne then pulls a cushion over the gun, shoots Ellie in the lung and she falls dead to the floor.

When Susan Delfino decides to leave Wisteria Lane with her children, MJ Delfino and Julie Mayer, and granddaughter, Ellie's ghost appeared alongside Nora Huntington and Karl Mayer at Wisteria Park, and they watched the family as they drove away from the lane and began their new lives together. ("Finishing the Hat")

Retrieved from "https://desperatehousewives.fandom.com/wiki/Ellie_Leonard?oldid=89619"
Community content is available under CC-BY-SA unless otherwise noted.