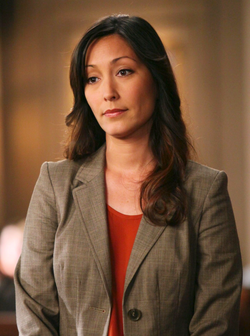 Emily Stone was Fairview's District Attorney, playing the part of the prosecutor in the trial of Bree Van de Kamp.

During Bree's pre-trial, Trip Weston queries Stone's witness list, as it details several, seemingly random, men. Stone informs him that the witnesses are various men Bree picked up at a bar, took home, and had sex with. Trip laughs at the explanation, however, Bree's face suddenly turns to one of embarrassment. Stone addresses the judge and suggests that one of the men Bree hooked up with was Alejandro Perez. Trip scoffs at this idea and reminds the judge that Bree Van de Kamp is "the champion of conservative values." ("Lost My Power")

At the trial, Stone shows Bree her suicide letter and makes her to read it aloud, suggesting that she killed Chuck and felt concerned later of what she did. ("The People Will Hear")

Later, Stone spies on Renee and Ben conversing in jail and hears an offhand comment about the night of the murder - she saw Bree acting suspiciously after their get-together. Outside the cell, Stone tells Renee that unless she testifies against Bree, she'll have Ben deported back to Sydney. Back in the court room, Karen McCluskey, deciding to show her gratitude to the housewives for looking after her during her illness, confesses to murdering Alejandro. Realising that the case is lost, Stone drops the charges against Bree and decides not to press any against Karen because of her cancer. ("Give Me the Blame")

1 of 5
Add photo
Retrieved from "https://desperatehousewives.fandom.com/wiki/Emily_Stone?oldid=79142"
Community content is available under CC-BY-SA unless otherwise noted.