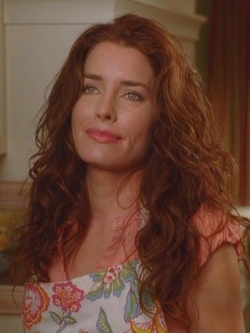 Emma Graham was a housewife who lived at 4356 Wisteria Lane. She had a dream to become a cabaret singer, so one day decided to set up a gig at a club in Fairview. However, the night didn't go precisely as planned.

Some time later, at The Smokehouse Lounge, Emma's cabaret show should be taking place. Gabrielle is sitting at the bar and Emma thanks her for coming to the show. "Yeah, yeah, are you going to be singing any songs about a woman who's a back stabbing bitch?" Gaby asks. Carlos hears this and comes up behind Gaby, telling Emma that they are really looking forward to it and wishing her luck. Emma thanks him and leaves. A short while late, just as Doug Perry finds out from Gaby that Renee Perry slept with his lawyer during the divorce settlement, Emma is announced onto the stage. She walks on as many people applaud her.

Renee angrily stands up and grabs a cheering Gaby, "A word?!" she says, she drags her to the back room by the arm and Gaby tells her to get her paws off the Versachi. "Why did you tell him that?!" Renee asks, "Well, you know me and my big nose!" Gaby replies. "This is my marriage we're talking about! This tromps your stupid nose!" Renee yells, "Oh, whatever, thy're both fake!" Gaby retaliates, "What do you know?" Renee asks, "You're nothing but a boring housewife!" Gaby tells her to shut up but Renee continues, "Whose life is so pathetic, you gotta crap all over mine!" Gaby is insulted, "I'm pathetic?!" she yells, "Hey, what do you call a girl who sleeps with a guy for eight million dollars?!" Renee is extremely shocked and angry.

Out in the lounge, Emma is singing on stage and Gaby's scream is heard from backstage, her and Renee tumble out of the room they were in and into the one full of the audience members and Renee and Gaby continue to wrestle, brawling on the floor. Renee yells, "I'm gonna kill you! You whore!" as they roll over and Renee becomes on top in the fight, "Get of me!" Gaby yells, pushing against Renee. Lee stands up and tries to get them to break it up but the girls are now standing up and Renee pushes Gaby and she knocks Lee right over, causing him to fly backwards. Renee lets go of Gaby, "I will never forgive you for this!" she yells, "Sure you will," Gaby says, "I'll just buy you a sapphire ring." Renee says, "Oh, you like my ring, get ready to smell it?!" Gaby tries to walk away but Renee pulls her arm, forcing her to turn herself to face her, Renee then punches Gaby in the face and the whole audience gasps with shock. In the next moment, Gaby is hysterical, cradling her nose which is now bleeding and becoming very worried. ("Let Me Entertain You")

Retrieved from "https://desperatehousewives.fandom.com/wiki/Emma_Graham?oldid=78606"
Community content is available under CC-BY-SA unless otherwise noted.