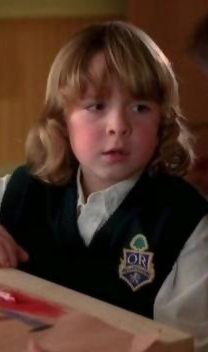 Evan's existence was first made clear in the episode "Opening Doors", in which Susan Delfino, Karl's first wife and Julie's mother, first learnt that her ex had married and impregnated someone else - Marisa, a law professor.

5-6 years later, Susan first met Evan when Karl enrolled him at Oakridge Elementary School, where Susan worked as an art teacher's assistant. Thanks to her profession, she soon learnt that Evan was a troubled young man, when she started noticing the angst he mirrored in his drawings, which depicted people in gory situations, including a man's head being chopped off. Karl wouldn't believe Susan's claims that his son had issues, passing it off as her just trying to get back at him for the way their marriage ended, but when she showed him a recent drawing Evan had made featuring a blonde, he realised that was his ex-wife Marisa, who had abandoned them because she felt "overwhelmed" by her domestic life. Since then, Karl had been raising Evan by himself, and was apparently not doing such a great job. Susan shares her sympathy with him, against all odds.

In "Bargaining", Karl asks Mike Delfino, Susan's second husband and MJ's father, to let Evan come to his son's slumber party because he was the only kid in the class not invited. Mike reveals that MJ didn't invite Evan because he's a bully, and declines to let him come. However, Karl blackmails Bree Hodge into convincing MJ to let Evan come (despite the poor young boy's claims that Evan had beat him with a dead squirrel), and he obliges. At the party, MJ asks his father if he and Evan can have another candied apple, making it seem as though they're friends at last.

Retrieved from "https://desperatehousewives.fandom.com/wiki/Evan_Mayer?oldid=89724"
Community content is available under CC-BY-SA unless otherwise noted.