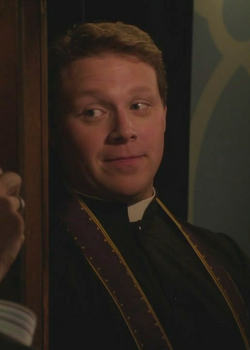 Father Benson is a Catholic priest seen in the eighth season premiere.

At the Catholic church, Father Benson opens the sliding window of the confessionary where he is sitting across next to Carlos Solis, separated by the division. Carlos makes the sign of the cross on his face and says "Bless me father, for I have sinned. It's been a while since my last confession", rather quickly. He hears the voice of the father saying "Continue, my son"... and then immediately holding back his laughter. "My son...", he goes on to say, "I'm sorry, it's just you're like a thousand years older than me." Carlos opens his sliding door to reveal a younger priest. He asks who the man is, and asks for Father Dugan's whereabouts. Father Benson explains that Dugan is leaving on sabbatical, which is fun for him and fun for Benson too, because this is his first week of confessions. Carlos asks "It is?", to which he replies "Yeah. And man, the things I've heard. There was a lady yesterday who..."; then, Father Benson interrupts himself, reminded that he can't say it. Carlos tells the priest he'll come back, but as he prepares to leave, his wife Gabrielle barges in and keeps him from going anywhere, and he reminds her that he told her to stay in the car, to which she responds that he is not to snap at her. He's been saying he wants to talk someone, so he should just talk to this guy, who seems perfectly enthusiastic. Benson tilts his head positively, and Carlos says that he's 12 years old. Father Benson becomes convinced that what they came there to share must be awesome, and then reveals that he's so bummed he can't tweet anymore. Carlos says that if it's not Father Dugan hearing him out, then he doesn't want to confess. He then shuts the sliding window, and Benson is left there, saying "Nuts. I was really hoping this would be a good one." Gabrielle then slides the window open again and says "I made out with two chicks once in college." She then shuts the window again. Benson says to himself, before smiling, "This job rocks!". ("Secrets That I Never Want to Know")

Retrieved from "https://desperatehousewives.fandom.com/wiki/Father_Benson?oldid=72388"
Community content is available under CC-BY-SA unless otherwise noted.