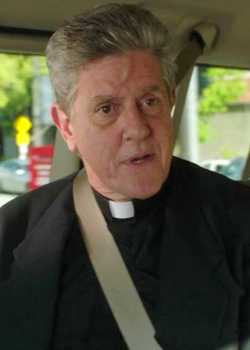 Father Dugan is a Catholic priest whom Carlos Solis wanted to confide in.

Father Dugan is a Catholic priest who worked at a local church. Carlos Solis, following the accidental murder of his wife's stepfather, wanted to confide in the priest, hoping to be absolved from the crime he committed. However, after convincing his wife to let him see the man, he found Father Benson in the church's confessionary instead. The priest then told him that Father Dugan was going on a sabbatical and, because it was Benson's first week in the confessionary, Carlos chose not to confide in him.

Later, Gabrielle runs into Father Dugan, who's coming out of the church and strolling around a suitcase, and she tells him she's so glad she caught him. She says she doesn't know if he remembers her, to which he replies "Gabrielle Solis. I assume you've come to apologize for taking a phone call during my Easter sermon." She apologizes to him, but explains that if one doesn't confirm those spa appointments, they lose them. She then explains to him that she came there about Carlos, who needs his help. Father Dugan explains that he'd love to help Carlos, who is a good man, but she's too late. She tells him he's the one who kept blabbing during his sermon that it is never too late to confess one's sins. She then boasts that she can listen and take calls, while the minister gives his suitcase to the driver of the airport shuttle, who's putting the luggage in the back of the van. He then tells Gabrielle that's true, because God waits till the heart is ready, but the airlines are a little stricter, and he's not going overseas in the middle seat. He then enters the van and the shuttle driver asks Gabrielle if she'll be getting on too. She says she is, but she couldn't manage her bag. She tells the man to be a dear and grab it for her, and he gets back into the church's area. Gaby then gets into the shuttle, and Father Dugan asks her what she's doing. She buckles up and tells him she's taking him to the airport, with one quick detour. She starts the engine and drives away, with the shuttle driver getting outside and running after the van, yelling for it to stop. Father Dugan tells Gaby "Are you crazy? I can't miss my plane!", to which she replies "Well, I'm sorry if I'm trying to get you to do God's work, instead of going on your dream vacation to..."; Dugan completes the sentence with "Rwanda. Where I'll be digging wells. For leppers." Gaby says his little friends are gonna have to wait. She then hears someone saying "Excuse me.", and she is startled. In the back of the van, we see a young couple. Gaby asks where they came from, and the man, Jeff, tells her they're going on their honeymoon, whereas the woman, Ally, adds that they can't have any detours, as it is said that they have to get to the airport three hours early to catch international flights. Gaby says "Oh, honey, relax. Since we caught Bin Laden, you can stroll on the plane anytime you want."; as she keeps driving, Father Dugan gives her a weird look.

At the Solis home, in the living room, Carlos explains to Father Dugan that he's done something, and he's afraid it's unforgivable. The priest tells him God can forgive us for anything, if we're willing to show that we are truly repentant. Carlos asks how, and Dugan explains to him that it's not by what we say, it's by what we do. "For instance, if we were talking about a crime...", he says, catching Carlos' attention, "...then confessing to the authorities would prove the intentions of our heart.". A hesitant Carlos then tells him that's not an option, as there are other people involved, innocent people. Father Dugan explains that he can't ask to be absolved for a sin that he intends to keep hidden. Carlos thinks about it for a while, lets out a sustained smile, as though he's aware there's no salvation for him, and then tells the priest he should go, or he's gonna miss his flight. Father Dugan tells him he doesn't want to leave him, not until he's sure Carlos will be okay. Carlos says "Father Dugan, I don't see any way that I am ever going to be okay."; Father Dugan, after a while, gets up and shakes hands with Carlos, while it is revealed to us that a very worried Gabrielle had been listening to their conversation from the entrance of the house. Later, Gaby absolves Carlos herself.("Secrets That I Never Want to Know")

Retrieved from "https://desperatehousewives.fandom.com/wiki/Father_Dugan?oldid=72386"
Community content is available under CC-BY-SA unless otherwise noted.