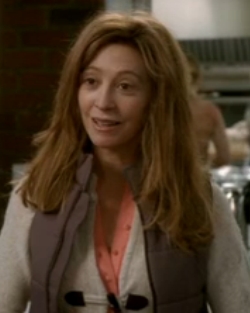 Fran Schulman was the once beautiful and rich friend of Gabrielle Solis, but she became homeless after her husband, Mark, passed away.

Fran was married to a rich man named Mark. They both lived together in a large house and lived a glamorous life. They often threw parties, and Gabrielle and Carlos used to attend them. However, Mark eventually became sick for a long time and they lost all of their insurance. Mark then died, leaving Fran broke, forcing her to live on the streets as she had no family or true friends to turn to.

While waiting in line for soup one day at a charity center, Fran ran into Gabrielle, and she tried to avoid her, but Gaby got her attention and said hello. Gaby then asked if Fran was volunteering at the center, so Fran replied "not exactly". Gabrielle still didn't catch on and explained how ungrateful her daughter was and then asked if Fran wanted to go for a cappuccino. Fran then explained that she was there to eat, shocking Gabrielle.

A while later, Gabrielle returned to see Fran as she was desperate to find out how she lost her fortune. Gabrielle explained that she'd been thinking about Fran a lot since she left and she said she wanted to help. She pulled Fran aside and started to give her money. Fran thanked Gabrielle and tried to hold in her tears. Before giving the money, Gaby made sure Fran wouldn't waste it on alcohol, but Fran explained drinking wasn't her problem, nor drugs, or gambling. Frustrated, Gaby asked what happened to Fran because it didn't make sense. Fran told Gabrielle that she lived her life too well with her husband, and then he died, surprising Gaby. As Fran left with her money, she thanked Gabrielle and said that everyone sooner or later will become poor. Gabrielle said that she didn't agree because Carlos went blind and they lost all their money, but they survived. Fran then told Gaby that just because they survived that it didn't mean nothing bad will happen, and she hoped nothing would happen. She then told Gabrielle how much she regretted not appreciating her things while she had them. ("Marry Me a Little")

Retrieved from "https://desperatehousewives.fandom.com/wiki/Fran_Schulman?oldid=74135"
Community content is available under CC-BY-SA unless otherwise noted.