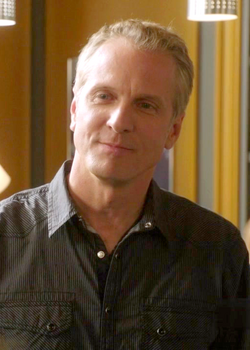 Frank was Renee's hairdresser that went on a date with Lynette.

He and Lynette first met when Renee takes Lynette to the salon that he is a hairdresser at- and they are both attracted to each other, leading to a date set up by a reluctant Renee. However, on the date, Frank is annoyed by Lynette as she begins making him a five year plan because she can't help taking control, something that she plans to deal with. For this disaster of a date, he blames Renee and therefore purposfully ruins her hair by giving her a huge perm. ("What's the Good of Being Good?")

In the next episode, the two are shown on a date- and he appears to have given her a second chance after their first date ended in disaster. This date goes considerably better, so much in fact that Lynette invites him to her house for dessert. However, Frank took "dessert" as being a cover for sex but finds out that Lynette actually meant dessert. When he explains his confusion on the matter and Lynette is embarrassed, she explains that she is not prepared for a sexual encounter and he kindly understands and leaves.

When he arrives for their next date, Lynette immediately offers him "dessert" and this time she actually means sex. The two have a negotiation about the lighting before making love and then during, in a conversation with Renee, it's revealed that Lynette starts crying, realising that her marriage is really over and that she is now moving on with Frank.

Even after this, Frank returns to Lynette's house later on with pizza, he says that he understands and would have thought twice about her if she had not been thinking about her husband as that bed had been shared with the same man for twenty years. ("Is This What You Call Love?")

Retrieved from "https://desperatehousewives.fandom.com/wiki/Frank?oldid=67905"
Community content is available under CC-BY-SA unless otherwise noted.