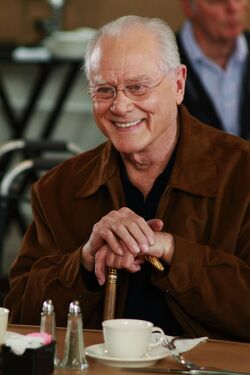 Stella announces to her daughter Lynette that she is marrying Frank, and Lynette wants the two to meet. Stella introduces Lynette to Frank and she is horrified by his racist, rude behaviour. During Stella's wedding day, Lynette urges her mother not to marry Frank. Stella had previously revealed that she was marrying him because he's loaded with cash, but now tells her daughter it's really also because Frank makes her feel needed, which is something she needs herself. The pair later get married, despite Lynette's feelings on the situation. ("I'm Still Here")

Frank wants a family portrait to send to all his other families out of spite. When Lynette tries to weasel out of it, Frank tries to bribe her with $500 of 'gas money'. Lynette informs him that that’s not going to work. However, Stella and Frank are more than welcome to come over to the Scavo place for a family photo op. A first picture is snapped, but it’s not a good shot. Frank’s eyes were closed. That’s because he’s dead. ("Flashback")

Retrieved from "https://desperatehousewives.fandom.com/wiki/Frank_Kaminsky?oldid=88462"
Community content is available under CC-BY-SA unless otherwise noted.