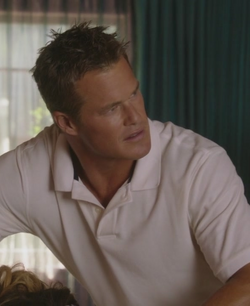 Friedrich is Renee Perry's masseuse who Lee assumed to be gay.

At Renee’s house, Renee is getting a massage off a man named Friedrich. Renee reminds him that she has hidden a tip around her body and that it is up to Friedrich to find it. She then rests her head down and sighs with relief and relaxation. However, the doorbell suddenly rings. Renee yells for the person to go away, but Lee bursts through the front door, yelling for Renee. Lee, in a panic, says he is in crisis… but then Friedrich catches his eye. He introduces himself, and Friedrich introduces himself back. Lee asks if his name is like the one in The Sound of Music, but Friedrich just gives him an odd look, making Lee realize that he’s straight. He then tells Renee he needs a huge favour for Jenny, but Renee declines. He then lies on the floor to get Renee to look at him, and he tells her that the “boob fairy” has visited, and with Bob gone, he doesn’t know what to do. He then asks Renee to take her shopping, but Renee says it’s just a bra. Lee tells Renee that bras scare him because of the numbers, letters, colors and that it’s his little girl growing up. Renee then moans “yes” in a high pitched tone, making Lee think she accepted, however, she explains that Friedrich found his tip. Lee then begs one more time, making Renee give in. Lee thanks Renee, and then as he leaves, he tries one more time to see if Friedrich is gay by yelling Ricky Martin is behind him eating a banana. Friedrich doesn’t even react, disappointing Lee greatly. ("Watch While I Revise the World")

Retrieved from "https://desperatehousewives.fandom.com/wiki/Friedrich?oldid=78927"
Community content is available under CC-BY-SA unless otherwise noted.