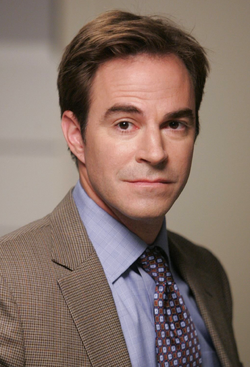 George Williams was an oddball pharmacist and obsessive loner who became a love interest of Bree Van de Kamp, after poisoning her husband to death.

Little is known about George's early life, only that his mother was firm with him.

Bree enters the pharmacy for Rex's perscription and is complimented by George on how lovely she looks today. Bree replies that George always says the nicest things and then informs George on Rex's heart attack. Bree then asks George on a date, explaining that she and Rex are separated. As George arrives at Bree's that evening he is briefly left alone with Rex, as Bree leaves the room, awkwardly exchanging pleasantries before Rex bursts out laughing. When George asks what is so funny Rex explains that he was recently caught engaging in some extracurricular activity and dating George is Bree's way of making Rex pay. As Bree enters the room George says goodbye to Rex and quickly heads for the door, leaving with Bree. ("Move On")

George and Bree return from another enjoyable date and Bree hugs him goodbye once she sees Rex looking through the window. They meet for a picnic a few days later but when George places his hand on Bree's leg she uncomfortably suggests that they leave. However George says that he has a gift to give her to show her how much the past few weeks have meant to him. Bree seems concerned with how much gifts she has been receiving from George however is incredibly pleased once she sees the gift, a World War II pistol. Bree takes George to try it out after he says that he has never fired a gun. Bree tells him that there is no feeling like it and George expresses his excitement, also explaining what their time together has meant to him as he no longer feels lonely. Bree proceeds to help him fire the gun however George attempts to kiss her and Bree steps back, causing the gun to point downwards and shoot George in the foot. Later, Bree visits George in the hospital and appolgises and as George asks why she pulled away she explains that she still has feelings for Rex. George visits Bree at her house, saying that he really needs their friendship back, however Bree turns him away. As George leaves and sobs he falls over and screams at Bree, when she tries to help him, telling her that he doesn't need her or anyone. George then goes home and watches surveillance videos of Bree, from the pharmacy.("Every Day a Little Death")

Bree is sitting in a diner when George walks in, saying that he saw her through the window and didn't think of her as a diner girl. Bree explains that she isn't but just needed to get out of the house. George offers to leave however Bree asks him to stay and begins telling him about how she met Rex and their marriage problems (the lack of trust due to the adultery). Bree asks George what she should do and George tells her that if he loves her and is a good man then she should find a way to forigve him. Bree thanks him, saying that he is a special man. Rex later comes to visit the George at the Pharmacy and tells him to stay away from Bree. George assures him that they are just friends and Rex tells him that if Bree gives George a sign that she wants to be more than friends then George should be cautious, since the only reason that would happen would be so Bree could get even. George says that Bree would never do that however Rex tells him that ladies like Bree tend to end up with Doctors and not guys like George. George says Bree is wrong about Rex being a good person and tells Rex that he can't find his prescription and that he will have to mail it. Rex leaves and George throws Rex's pills in the trash. ("Your Fault")

George sees Rex and Bree at a flower show. George offers them to attend a bonsai exposition with him. Rex declines however Bree decides to go with George herself. Rex expresses unhappiness over this however Bree assures him that they are just friends. Later, Bree visits George at the pharmacy, after talking to Rex and having a change of heart. However George tells her that he is dating Ginger and so has nothing to worry about. Bree invites him to Gaby's barbeque and tells him to bring Ginger so Rex will see that George no longer has feelings for her. As they arrive at the barbeque George leaves Ginger at the buffet, telling her to fit in, and makes his way to Bree however is stopped by Rex. Rex asks what he is doing here and why he can't take a hint. Bree comes over and George explains to Rex that he is dating Ginger so Rex has nothing to worry about. Rex doesn't believe George and when he is asked for an apology he responds by pushing George into the swimming pool. George accidently takes Bree with him and as they fall into the water everyone at the party stares at the drama. Bree comes to visit George at the pharmacy and apologises for Rex's behaviour. George says that Rex isn't going to let them be friends but Bree tells him that Rex doesn't need to know. ("Fear No More")

After Rex's death, George attempted to move his and Bree's relationship on, but it was revealed that she felt guilty about her relationship with George and was still attached to Rex, which manifested itself not only with an unexpected attack from Bree's son Andrew, but also with an itchy rash on Bree's skin. While on vacation with Bree, George drugged her by talking her into mixing antihistamines (which she took for her rash) with alcohol. It appeared George thought better of taking advantage of Bree in this way but when she woke up, he told her that he won't wait much longer, thereby finally getting Bree into bed. George proposes to her and she felt pressured into agreeing. After Bree told George about her chat with Dr. Goldfine in which he suggested she and George were taking their relationship too fast, George attacked Dr. Goldfine and beat him up, then threw him over a bridge. Dr. Goldfine was injured but survived.

After the bridge incident, George became rather possessive. He objected to Bree's reluctance to wear her engagement ring and was angry that she still felt the relationship was moving too quickly. Bree, in turn, became annoyed when she saw her engagement to George announced in the newspaper. This announcement brought George's ex-fiancée to Bree's house, where she warned Bree that George was quite unstable, and not the type of person to have a relationship with. Bree dismissed her, refusing to believe her. Later, while Bree and George are out having dinner, they meet Bree's old college boyfriend, Ty Grant. Bree asks him to dance and he agrees, much to George's dismay, leading Bree to end her relationship with George. In retaliation, George stole Ty's valet ticket from his jacket, sped off in his car, took it out to some remote location, and set it on fire.

George started stalking Bree and tried to get her back by singing to her in front of her house during a dinner party. Bree took out a shotgun and blew out his speaker as a result. George then found out the police were closing in on him and searched his house after Bree went to the police, suspecting George was involved in Dr. Goldfine's attack.

George retreated to a hotel room (in the same hotel where Bree is co-hosting a charity event) and had a bellman give her a note. He then overdosed on sleeping pills which ultimately led to his death. When Bree arrived, George begged her to call an ambulance, but she had just spoken to Detective Barton, saying he had evidence that George was responsible for Rex's death. Initially Bree tried to get George to admit that he killed Rex, saying that although it would be the most difficult thing she had ever done, she would forgive him. George however showed no remorse and said that he killed Rex because deep down Bree wanted him to. Shocked and sickened Bree realised the extent of George's moral deficiency. Wanting George to pay for what he had done told him that she had called the ambulance while he was sleeping, and then sat and watched him die.

When Susan Delfino decides to leave Wisteria Lane with her children, MJ Delfino and Julie Mayer, and granddaughter, George's ghost appeared alongside Mona Clarke and Juanita Solis, in front of 4362 Wisteria Lane, and they watched the family as they drove away from the lane to begin their new lives together. ("Finishing the Hat")

Retrieved from "https://desperatehousewives.fandom.com/wiki/George_Williams?oldid=89629"
Community content is available under CC-BY-SA unless otherwise noted.