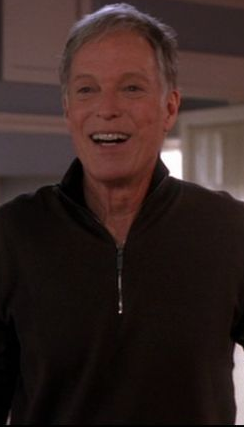 Glen was Stella's third husband, and they were married for two years. Glen played the part of the only appropriate and influential father figure Lynette ever had, and she loved him deeply. However, Glen and Stella's marriage fell through and they got divorced.

Lynette always assumed it was because her mother had cheated on her husband, and thus she resented her mom for approximately 30 years, until she was reunited with Glen (in "Distant Past") after her mother had left her house (in the previous episode). Lynette couldn't be happier to see her former step-father, and so was he, albeit a bit surprised by her scarf-wearing bald head, resultant from her chemotherapy. Glen was there because Stella had called in to ask for some money, and the two agree to set her up to get caught by her daughter. He had agreed to meet Stella at a nearby park, and when he does so, Lynette stays hidden in his car. Stella meets with him and compliments his looks, asking how he could have stayed so young all those years. She notices her daughter sitting in his car, however, and realizes she's been scammed. She starts to walk away, and so Lynette gets out of the car and chases after her. She tries to tell her mother she's welcome to come back home with her, and they start to get at each other's throats about how Stella cheated on Glen again, so he is forced to intervene and tell Lynette the truth: he is gay, and that is why his marriage to Stella end

ed. It had nothing to do with her cheating. At Glen's house, he tells his former step-daughter and ex-wife about his life partner, Dave, who died the year before. He goes to get them some drinks, and Lynette asks her mother how she could have kept that from her. Stella claims it wouldn't have changed anything between them, but Lynette says otherwise, saying she would have been able to forgive her mother all sorts of things had she known what truly transpired. She then insists on taking her back home, but Stella says she can't do that, because even though things are now fine between the two of them, that would soon change if they were forced to live together again. Glen overhears their conversation and offers a suggestion: that Stella stay with him, as he's been feeling rather lonely since Dave died. Stella agrees, as long as she can keep the money he gave her. Lynette is happy for the two of them.

In "Connect! Connect!", it is revealed by Lynette that Glen died sometime during the five-year-jump that occurred between the events of seasons 4 and 5, which is why Stella was evicted and Lynette had to put her in a nursing home.

Retrieved from "https://desperatehousewives.fandom.com/wiki/Glen_Wingfield?oldid=85769"
Community content is available under CC-BY-SA unless otherwise noted.