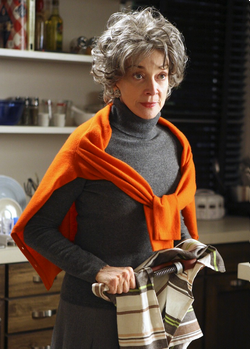 Gloria Hodge is the callous mother of Orson Hodge. She killed her husband Edwin, Monique Polier, and attempted to kill Bree.

Gloria was a devoted, domineering mother, who was ridiculously strict with Orson. Gloria had uptight values, and as a Catholic, was very devoted to God. She had Orson circumcised at age 5, telling Edwin, her husband and Orson's father, that they were going to buy ice cream.

Gloria was involved in an unloving relationship with Edwin, who was an alcoholic and suffered from severe bouts of depression. Edwin had an affair, which caused a scandal at the family's local church, and their marriage disintegrated further. One evening, Gloria left to visit a sick friend and told Orson to look after Edwin and to make sure he doesn't do anything irrational. Orson ignored her orders and went to a party. Gloria, knowing her son would do this, returned home and murdered Edwin by slashing his wrists and placing him in a bathtub - staging the murder as suicide. She blames the death of her husband on Orson and eventually sends him to a mental hospital where he spent most of teen years.

Gloria later arranged the marriage between her son and a woman named Alma, subsequent to her getting pregnant with Orson's child. Alma miscarried but Gloria refused to let Orson leave the marriage and upheld her religious values believing marriage is for life.

When Orson begins having an extramarital affair with an air-hostess, Monique Polier, Gloria is outraged with Orson's sinful act and murders Monique. She tells Orson that it was an act of self-defense and the two bury the body. Following this, Gloria is sent to a nursing home with her house and car being sold by Orson.

Bree Van de Kamp, Orson's new wife, arrives at the nursing home to give Gloria a Christmas card. She is confused when she discovers that Gloria is not senile, as Orson told her, and invites her to live with her family. Gloria soon comes to stay and Orson informs her he's sold her house and all of her things. Unbeknowest to Orson, Gloria has kept in contact with Alma over the past year, and discovering Orson's new wife, she requests for Alma to return. Everyone's speculation of Orson murdering Alma is proven wrong when she turns up alive and well. Orson and Bree are not pleased when Alma buys a house just down the street.

Gloria and Alma soon try to find a way to get Alma to seduce Orson. They succeed, with Gloria phoning Orson and telling him Alma committed suicide while leaving a suicide note. He arrives at the house, where he finds Alma laid on a bed. However, Gloria gives him a spiked drink which renders him unconscious, but is also dossed with an erectile dysunction pill. He is surprised when Alma sits up and apologies to Orson as Gloria leaves. Alma then has sex with Orson as he is unconscious, and both of them fall asleep. Bree than discovers them in bed together. At first she thinks Orson's cheating, but she discovers Alma drugged him. She punches Alma in the face and takes Orson home. When Orson discovers what they did he tells Alma and Gloria that no matter what they threaten to do, he is always going to be with Bree. Alma just says they should give in. However, Gloria locks Alma in an attic and leaves to plot. While Orson is at the hospital following a fall from a tall building, Gloria places an unconscious Bree into a bathtub and plans to make it look like she committed suicide. Andrew comes to rescue her, but Gloria hits him with her cane and he tumbles down the stairs. As Gloria is about to slit Bree's wrists, Orson runs in and discovers Gloria had done this before, and that it was she who had killed his father. Orson tackles Gloria to the ground and rescues Bree. Gloria then suffers a stroke. Orson later discovers Alma's body outside her house after she fell from the roof trying to escape and warn someone about Gloria's plans. Orson places Gloria, who is now paralyzed, next to Alma's body and places the bag of Monique's teeth and Alma's suicide note next to them, making it look as if Alma had committed Monique's murder, when in fact it was Gloria.

Ida Greenberg discovers them in the morning and it is wrongly concluded Alma was the killer of Monique and that after Gloria had seen Alma dead she suffered a stroke, and is now completely paralyzed. Orson later visits Gloria at the hospital and points her head to the door saying she can watch him walk away because it's the last time she'll ever see him, leaving her sad she didn't do things differently.

Gloria is seen in a flashback, when the show recaps on events that happened in Season 2 and 3, instructing Orson to run over Mike. ("In Buddy's Eyes")

Gloria is briefly mentioned when Bree and Orson are talking about Bree's dislike for her new in-laws. Bree references to Gloria's stroke which occurred off-screen: "At least Gloria had a good taste to have a paralyzing stroke so we don't have to deal with her", to which Orson replies, "True, that was a merry Christmas." ("Home is the Place")

Visibly, Gloria is a weak, frail old woman. But underneath, Gloria is a scheming villainous woman with an awful temper and a deep religious ethic. She was a murderer.

Gloria is portrayed by Dixie Carter, who Marc Cherry previously worked with on the show Designing Women.

Retrieved from "https://desperatehousewives.fandom.com/wiki/Gloria_Hodge?oldid=89769"
Community content is available under CC-BY-SA unless otherwise noted.