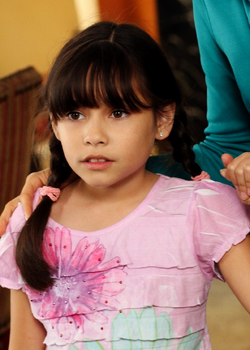 Grace Sanchez is the biological daughter of Carlos and Gabrielle Solis and biological sister of Celia Solis she is also the legal daughter of Hector and Carmen Sanchez. She and Juanita Solis were switched at birth by nurse Teresa Pruitt.

Grace was born in Fairview Memorial Hospital to Gabrielle and Carlos Solis, however she was switched at birth with Juanita Solis by drunken nurse Teresa Pruitt.

Due to the switch, Grace spent her life living with Hector and Carmen Sanchez, a young couple of Mexican immigrants.

Growing up, the family had a lot of financial issues. Hector and Carmen taught Grace to always be polite and to always care for others.

Because of her family's financial troubles, Grace had purchased a purse for $3 at a flea market. ("The Thing That Counts is What's Inside")

After discovering that Juanita and Grace were switched at birth, Gabrielle and Carlos arrange a meeting in the park with Carmen and Hector, so that both families get a chance to see their biological daughters.

On arrival at the park, Gaby and Carlos see Grace throwing a tantrum over her mother getting the wrong colored jacket for her, saying it wouldn't go with the shoes she is wearing and Gaby knows that Grace is definitely her daughter.

Grace hits it off with Juanita and Celia, gaining the friendship of them both. After a while, Grace comments on Gaby's Chanel purse, saying that she would love to own nice things some day as Hector and Carmen are not in a great financial situation.

Gabrielle is saddened by this and purchases a $1,200 purse for her. However, when she attempts to deliver the purse at the Sanchez household, Carmen refuses to accept the gift as she is a proud woman and does not want handouts.

A few days later, Gabrielle and Hector meet with Gaby and Carlos at the Solis' home, where both women spend time bonding with their daughters.

Carmen spends the time baking and teaching Juanita how to cook whilst Gabrielle takes Grace to her room, who fawns over the expensive jewelry collection.

Gaby gives Grace a special gift, a necklace she had brought with her very first modelling pay-cheque, Grace promises never to tell her mother about the gift and hides it inside her $3 purse which was brought at a flea market. ("The Thing That Counts is What's Inside")

Grace and Juanita talk in Grace's bedroom, about how they are excited to go trick-or-treating.

Grace wants to go with a small plastic pumpkin to which Juanita explains that she filled two pillow cases full of candy last year.

Juanita looks in Grace's box, and finds the necklace that Gabrielle gave to her. Juanita asks Grace where she got the necklace and she tells her that it was a gift from her aunt.

Juanita doesn't believe Grace's lie and steals the necklace back, believing she stole it. Gaby tells Juanita that she didn't steal it, and that she gave it to Grace as a gift.

Juanita asks why she gave it to her, and Gaby tells her that it is because her family is poor.Later, Gaby is making a Halloween costume for Grace, dressing her up as a princess whereas Juanita was dressed as a dog.

Juanita desperately tries to get the attention of Gaby, to no avail. Celia, Juanita and Grace go trick-or-treating with Gaby and start at the Scavo home, where Allison Scavo compliments Grace, saying how proud Gaby must be of her. Juanita is noticeably saddened by this.

Later on in the night, Juanita and Grace look over how much candy they have collected and Gaby tells Grace that she earned every piece, but not Juanita.

When Gaby takes Celia for a bath, Grace struggles to remove the tiara from her hair.

Juanita hurries with a pair of scissors and tells Grace that she can take care of it, "accidentally" removing a large chunk of her hair. ("Excited and Scared")

Hector, Carmen and Grace visit the Solis' home for Thanksgiving dinner, however, Gaby forgets to buy dessert so Hector drives her to the store to buy the pies, since she has had a glass of wine.

On their way to the store, Hector and Gaby get stuck in traffic and Hector suggests they just forget the pies. Gaby refuses and makes Hector drive up on the shoulder, which is against the law.

In a bout of bad luck, they are pulled over by the police. The officer asks to see Hector's drivers license, however he does not own one.

As Hector is in the country illegally, he is arrested by the police officer. Gaby returns to the house in Hector's truck and tells Carmen and Carlos what has happened.

Carmen grabs Grace and they speedily retreat in Hector's truck. Gaby rushes over to the Sanchez's home and tells Carmen that she has hired Bob to help them, but Carmen refuses the help and proceeds to pack up their things.

Gaby desperately tries to convince her to stay for the sake of Juanita and Grace. Carmen is visibly upset and breaks down and hugs Gaby.

Carmen, Carlos, Gaby and Bob speak in the Solis' living room. Bob explains that there is nothing he can do to help Hector and Carmen also runs the risk of being deported.

Her only option is to disappear. Grace, however is an American citizen and does not run the risk of being deported. ("Sorry Grateful")

Gaby walks into her kitchen to find Carmen looking over a map. Carmen reveals that she has spoken to Hector and he is staying with his cousins in Sabinas and announces that she and Grace will be leaving for Texas in 2 days.

Gaby suggests that Grace stay with her for a few months until Carmen gets settled and Hector can cross the border.

Carmen refuses, saying that her and Hector are all the family that she needs. Gaby says that it will be best for Grace to stay with her, to which Carmen responds saying that Grace will become a spoilt girl who doesn't think of others if she stays with Gaby. Gaby, angry and dejected, calls the immigration office and turns Carmen over in an attempt to have Grace live with her.

When the immigration arrive at the Solis' house, Gaby immediately feels remorse and guilt for what she has done when she sees how much love Grace has for her mother so she hatches a plan.

Gaby (posing as Carmen) is taken by immigration to buy her and Grace some time.

Carlos checks Grace and Carmen into a motel, and they plan to leave for Texas the following morning. The next morning, Gabrielle and Carlos say their goodbyes to Carmen and Grace.

Gaby tells Grace to never let go of her dreams and gives her a hug. Carmen then speaks to Gabrielle about what she said about Juanita being a spoiled girl and apologizes.

The two thank each other for taking care of each other's children and share an embrace. Gabrielle is left tearful as Grace and Carmen drive off to Texas. ("Pleasant Little Kingdom")

Following Grace's departure, Gaby is visibly dejected. Lynette speaks to her and suggests a technique that her therapist taught her; to write Grace a letter but not send it. Gaby tries this at home and it proves to be a good way of letting out her feelings.

Whilst writing the letter, Gaby is called away to help Carlos. Hiding under the bed, Juanita comes from hiding and reads the letter her mother had just written and is noticeably confused by it.

Later on, Gaby finds Juanita sitting on the couch with the letter.

Juanita confronts Gabrielle about the letter, telling her that she knows Grace is her daughter and that she loves her more than her.

Gaby denies this immediately, telling Juanita that she is the most important person in the world to her.

Gaby attempts to hug Juanita, however she pushes her down, telling her that she's not her mother. She then runs off into the large crowd outside. ("Down the Block There's a Riot")

To help Juanita forget about the secret she has uncovered, Gaby takes her to Miss Charlotte's Doll Academy to buy her a doll. Miss Charlotte takes Juanita to the "royalty cabinet" and shows her a doll named Lady Catherine which Juanita adores.

Whilst Gaby is taking her phone out to take a picture of Juanita and her new doll, she comes across a picture of Grace which Juanita is angry at. Juanita throws the doll on the counter and leaves the store.

Because of this incident, Gaby and Carlos take Juanita to therapy sessions. The therapist tells them that the only way for Juanita to stop feeling this way is for them to remove Grace from their life by deleting all photos of her and removing her artwork from the refrigerator.

Gaby finds it hard to throw all of the pictures away and forget about Grace, but Carlos enforces it by telling her that Juanita is more important.

A few days later, Gaby returns to the doll store and "adopts" a doll named Princess Valerie. Miss Charlotte assumes that the doll is for Juanita, but Gaby tells that this one is for her. ("Assassins")

After Bob and Lee reveal that they will be adopting a 10-year old girl, Gaby is visibly upset and finds comfort in the doll she brought from Miss Charlotte.

When Gaby returns from a shopping trip with Bree, she is shocked to discover pieces of Princess Valerie scattered across the stairs.

Enraged, she shouts at Juanita and Celia, explaining that Princess Valerie is not a toy, but something special to Gaby.

Bree overhears the shouting and questions Gaby about the doll, Gaby then lies, saying it is a present for Bob and Lee's new adoptive daughter.

Later on, Gaby takes Princess Valerie to Miss Charlotte's Doll Academy to be fixed, where Miss Charlotte tells Gaby she will fix her by the end of the day.

Gaby asks Miss Charlotte if she is weird for being so attached to a doll, and Miss Charlotte takes her to the back of the store and explains that what she is feeling is normal.

Miss Charlotte explains that Mrs.Humphries is there for her always, and her sister died the same time hers did.

Miss Charlotte asks for the story of Princess Valerie and Gaby explains that she was switched at birth, and soon came to claim her royal birthright.

After the doll is fixed, Gaby puts Princess Valerie in a box on the top shelf of her closet. ("Where Do I Belong?")

Retrieved from "https://desperatehousewives.fandom.com/wiki/Grace_Sanchez?oldid=89408"
Community content is available under CC-BY-SA unless otherwise noted.