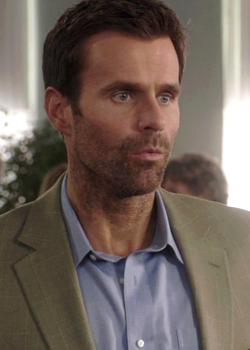 Greg was one of Bree's many sexual conquests whom she met at a bar.

Bree met Greg at a bar, where he offered her a glass of wine. Under an hour later they went back to Bree's house and had sex. After sex they both lay beside each other. Greg, said the sex was nice. Bree added that it was unexpected. Greg explained that when he bought her a glass of wine the previous hour it was a good “investment”. Bree said she doesn’t waste time when she sees something she likes and they began to kiss again. Greg called her decisive and sexy and said she may be the perfect girl. They then started to make out again, but an alarm bell suddenly rang, so Bree threw Greg off her. She bluntly told him to “get out”, confusing him. As she got out of bed to put her dressing gown on, she corrected herself and told him it’s time to go. Greg explained that it is 4am, so Bree told him Karen McCluskey wakes up at 5am so she’d be able to see him leave the house. Greg quickly got dressed and asked why she was bothered if Karen saw him, so Bree explained that she didn’t want to be the gossip of the neighborhood.

Moments later, downstairs, Greg finished getting dressed as he told Bree she was terrific. However, Bree seemed uninterested and she hurried him to get dressed so he could leave. Greg told her he’d love to see her again. Bree acted flattered and then gave him his jacket, saying it’ll be chilly. She then opened the door for him and they kissed goodbye. Greg said he wanted to see her again and he suggested Friday, but Bree told him she’s busy. As she tried to close the door on him, he suggested Thursday or Wednesday, he then asked for her number or last name. Bree suddenly realized that Greg actually liked her, so she came clean and explained she didn’t want a relationship, just a person in bed with her. Greg asked if she’s just going to kick him out, so Bree quickly hurried to get something, stating “where are my manners?” She returned with a basket full of muffins. Greg awkwardly took one and Bree said “it was lovely having sex with you, have a wonderful day”. She then closed the door in his face.

A little while later, at a local church bake sale, Bree is handing out slices of her cake. She calls out for the next person, and is shocked to see Greg standing before her. Clearly agitated, Greg asks what she’s doing here. Bree asks Greg if he’s a member of the church because she’s never seen him there before. He tells her he just joined and then tries to leave. Bree stops him and offers him some strawberry tart, but he tries to leave again. Bree stops him once more, but this time, a woman notices and approaches them. The woman over hears Bree invite Greg to her house, and she’s mortified. She asks who Bree is, so he explains she comes to the church. The woman, Audrey, says it doesn’t sound like they met in church, so Bree asks why she cares how they met. Audrey tells Bree she’s Greg’s wife, shocking Bree in a strange way. Audrey complains to Greg how when he’s supposedly doing late shifts at the office, he’s actually picking up “trash” from bars. Offended, Bree says she doesn’t like her accusations. Audrey loudly says she doesn’t like Bree sleeping with her husband. Reverend Sikes once again tries to make Bree leave, she asks why she’s being kicked out because Audrey is making a scene… and a dry batch of cupcakes. Audrey thanks Bree but says she doesn’t want baking tips from the “town whore”. Karen tells Bree not to worry as Audrey doesn’t know who she really is, but Bree says she does. Bree announces to everyone at the sale that she knows they’re anxious to dig into the juicy gossip she’s provided and that she needs a drink. As she leaves, she “tuts” Greg for his adultery. ("What's the Good of Being Good?")

Retrieved from "https://desperatehousewives.fandom.com/wiki/Greg?oldid=86308"
Community content is available under CC-BY-SA unless otherwise noted.