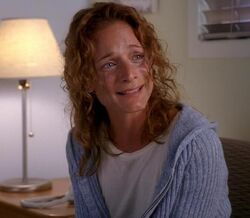 The haggard woman is a lady Gabrielle Solis meets at the Sacred Heart Hospital in "Next".

After trying to get a receptionist to slip her someone else's paternity test results so she could tamper with them in order to fool her husband, but to no avail, Gabrielle notices the woman crying in her seat and sits down next to her. Gabby asks her whether she's checking out paternity test results, and the woman nods affirmatively. Gabby claims that she's in the same situation, however she soon learns the woman's is actually quite different: she just learnt that the clinic screwed up and gave her an egg that belonged to some lesbian, which was supposed to have been implanted on her lover, and now her husband's freaking out because he thinks they're baby's gonna be gay. Gabby asserts that they're in slightly different situations, but she then suggests to the women that they have a cup of coffee and talk about it. The woman says that'd be nice, and is told that girls need to stick together, and that they shouldn't let a stupid piece of paper ruin their lives. As she says this, Gabby takes the paper off of the woman's grasp, and she says "Yeah!" They get up and Gabrielle folds the paper and takes it with her.
Retrieved from "https://desperatehousewives.fandom.com/wiki/Haggard_Woman?oldid=74147"
Community content is available under CC-BY-SA unless otherwise noted.