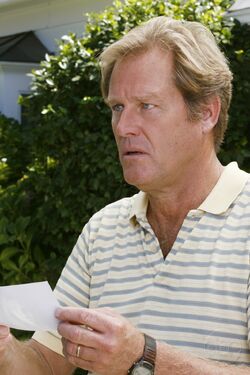 Harvey Bigsby was the husband of Carolyn Bigsby. He was an old friend and neighbor of Orson's before he moved to Lakeview Drive He was the manager of the Field's Market and had a romantic affair with Monique Polier.

Harvey is introduced as Carolyn's husband in "Sweetheart, I Have to Confess". He forces his wife to apologize to Orson and his second wife, Bree, for announcing during their engagement party that the former had murdered his first wife. After Bree accepts the apology, the Hodges and the Bigsbys agree to have lunch some time, and that time comes sooner than expected, as Bree realizes Carolyn's apology was a false one and she still kept on spreading her poison among the women of the local country club. They meet to dine, and when Carolyn takes Bree to the bathroom with her, Orson notices that Harvey seems a little off, and the latter confides in his friend that he had an affair with a stewardess named Monique. Orson recognizes the woman in the photo he shows him as his own mistress. Orson the makes an anonymous call to Detective Ridley to tell him Monique, the dead woman found in the country club's new construction site, was involved with Harvey. Ridley visits the man, to ask him some questions.

In the following episode, Carolyn finds out from Bree, who had found out from Orson, that Harvey cheated. Carolyn calls her husband, who comes clean. She asks him who he'd prefer to be with hadn't Monique died, but can't get a straight answear, which leads her to grab a gun and head to the store to kill Harvey. However, he hides in his office with Edie Britt, and Carolyn holds his employees and customers hostage. The two squabble over the intercom, as Harvey tries to apologize to her and dismiss his affair as something that didn't matter that much. Carolyn laments certain sacrifices she had done for her husband, like giving up on her wish to have children and staying on diets. Later on, she is shot in the head by one of her hostages.

Retrieved from "https://desperatehousewives.fandom.com/wiki/Harvey_Bigsby?oldid=86303"
Community content is available under CC-BY-SA unless otherwise noted.