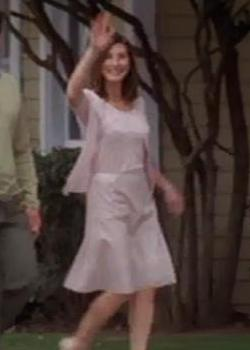 Helen is a resident of Fairview whose husband slept with Edie Britt.

Edie is running down Wisteria Lane with Susan clumsily following a distance behind her. She begs Edie to stop for a moment so she can regain her breath. Edie says they’ve only gone four blocks and she tries to start running again, but Susan doesn’t move. She then tells Edie that she lied to her about liking to run. Edie asks why she didn’t say anything, and Susan says because they were becoming friends and one of them had to cave in. Suddenly, a couple, Helen and Ed, walk by on the other side of the street. Helen yells hello to Susan, and Susan says hello back. Susan then tells Edie she’d introduce them to her, but once Helen starts talking, she doesn’t shut up. While looking at Helen and Ed, Edie says that Ed told her that. Susan asks if Edie has met Ed, and Edie says that they’re “doing it”. Susan asks what they’re doing, but Edie just says “it”, implying sex. Susan says that Ed is married, and Edie says that she’s a naughty girl. Susan tells Edie she’s being immoral and she’s committing adultery. Edie says that Ed is committing adultery, and all she’s doing is getting laid. Susan gives Edie a glare of disapproval, so Edie tells Edie to forget what she just said. Susan says she can’t just forget it as Helen is her friend; Edie reminds Susan that she said she was annoying. Susan agrees but says that she doesn’t deserve for her marriage to be wrecked. She then walks back home and Edie, mocking Susan, asks if they aren’t friends anymore and Susan says they aren’t. She then starts to run quickly back to her house. Edie yells that she thought Susan didn’t run, but Susan says “it depends on what I’m running away from”. ("Look Into Their Eyes and You See What They Know")

Retrieved from "https://desperatehousewives.fandom.com/wiki/Helen_(5.19)?oldid=73548"
Community content is available under CC-BY-SA unless otherwise noted.