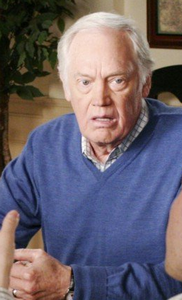 Bree’s father, who was a prosecutor from Rhode Island, said the simplest explanation was always the best one.When Bree was a child he told her that her puppy was taken to a farm where it could have space to run, when in reality it was put to sleep. He and his second wife, Eleanor, come for a visit in the second season after Danielle called to tell them that Andrew has taking Bree to court seeking emancipation. Henry persuades the judge to postpone the hearing to allow for the matter to be settled 'in-house'.

Henry initially tries a technique he learned from a Dutch therapist on TV to get Andrew and Bree to make up. After this fails Henry and Eleanor decide to take Andrew back to Rhode Island to live with them. They change their mind however after Bree and Justin team up to stop Andrew leaving. As they pack up the last of Andrew's things Bree brings out a box containing gay pornographic magazines and videos. After realising what exactly they are looking at and what Andrew is, they abruptly leave without him, leaving a letter saying that they are taking away his trust fund, meaning that Andrew can no longer afford to be emancipated.

In a flashback in season 8 his wife reveals that he was having an affair with his secertary (most likely Eleanor) due to the fact that the two got married shortly after his wife's death.

Retrieved from "https://desperatehousewives.fandom.com/wiki/Henry_Mason?oldid=89759"
Community content is available under CC-BY-SA unless otherwise noted.