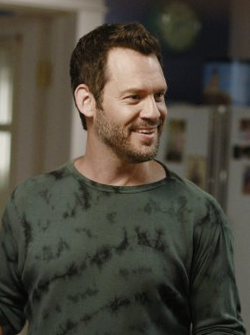 Herbert Brickmeyer grew up as a child in Levittown, New York with his family, who according to him, argued a lot. The constant arguments in his household led Rashi to become estranged from his family, becoming a yoga instructor to help people relax; he even "changed" his name to "Rashi", so he would no longer be connected to the family that he despised. He eventually met Lydia and after three weeks of dating, they got engaged. During a trip to a beach, Rashi picked up a pretty stone he found, and used as the stone on her engagement ring; and she liked it as it was cute. ("Watch While I Revise the World")

Lynette Scavo, Lydia's eldest sister, assumes she is coming for a visit because she's been recently dumped by some boyfriend, as is usually the case with Lydia, who's known for being unlucky in love. However, when she does show up, Lynette finds out that she is actually very happy in love, and engaged to a man named "Rashi", who's come with her. When they arrive at Lynette's house, he begins to unpack the bags from his van.


Later that day, in Lynette’s kitchen, Lynette is sat at her table with a glass of wine while she reluctantly listens to Rashi tell the story of how he and Lydia met. As he tells the story, Lydia giggles sweetly with him. Lynette gives them both a look of disgust as she sees how quirky and in love they both are. Lydia then says since they met, three weeks later they got engaged, and then she shows Lynette the ring. Lynette says “Wow, that’s some rock”, and then it’s revealed that the ring is literally a rock. Rashi says that he saw it on the beach after his class, and that it called out to him and he felt he may need it one day. Lydia then romantically says that he did, and then she tells Lynette that the universe is amazing. Lynette says it’s amazing thrifty, so Lydia gives an unimpressed, yet kind, scowl. Lynette questions why she isn’t getting a “buzz” from her third glass of wine, so Lydia explains that its alcohol free. Lydia then explains that she hasn’t had a drop to drink since Rashi did a liver-cleanse on her. Lynette congratulates Rashi’s “act”. He says it isn’t an act, just as he leaves to collect some spices from his van. The second he leaves the house, Lynette gets up and tells Lydia she can’t marry Rashi. Lydia says that she loves him and then she goes on to explain he’s leading a meditation seminar, and that Lynette should go because it could help with her marriage crashing. Lynette insists her marriage did not crash, and says that she and Tom are only separated. Lydia tries one last attempt at getting Lynette to go, but Lynette still refuses.


That evening, at Lynette’s house, Lynette, Lydia and Rashi are all sat at the dining table eating a meal cooked by Lydia. Rashi says it’s the best she’s ever done and he asks what’s in it. Lydia then begins to list the ingredients, and finishes by saying there was one special ingredient. Lynette begs her not to say “love” because she’s already nauseous. Rashi then announces he’s going for a walk to help his digestive system, and then he leaves. When he leaves, Lydia sees Lynette eating ice cream and says it’s “poison”. Lynette agrees and reminds Lydia that she used to eat it all the time. Lydia acknowledges that, but then says she’s changed and she wants to help Lynette change.


Lynette says she’s lying and says she’s only here to rub her happy relationship in her face. Lydia tries to stop herself from yelling at Lynette and she reminds herself she’s in a bubble of loving energy. Lynette says that once Rashi leaves her, Lydia will be back to her normal, neurotic self. Lydia tells Lynette she is very mean that she hates her. Lynette then sees the true Lydia surfacing. Lydia tells Lynette all her life she treated her like a screw-up, but now she’s the screw-up and she yells joyfully over and over that she loves it. With that, Rashi says “wow”, revealing he heard the whole thing. The two look at him with shock, and then he leaves the house, speechless at Lydia’s behavior. Lydia then sadly runs after Rashi, leaving Lynette feeling guilty.


The following morning, Lydia is sat in Lynette’s kitchen sadly eating ice cream with a glass of wine nearby. Lynette enters the room and sees the state Lydia is in, so she asks if Rashi is gone, which she says he is. Lynette asks if he dumped her, but Lydia explains he needed to meditate on if he can still marry Lydia after seeing the “real her”. Lynette then comfortingly says that if was Rashi was so quick to leave, then he may not be the guy. However, Lydia says he is, but she’s just not the girl. She then explains that she thought she could put her “loser stuff” behind her, and actually have a stable relationship. Lynette then suggests Lydia go talk to Rashi, but Lydia explains she can’t, because Rashi told her that her energy is no longer welcome in the Yurt.


A little while later, at Rashi’s Yurt, he is leading a meditation group as Lynette quietly enters. She shuffles around the small aisles, bumping into a few people on the way, as Rashi chants. She then reaches Rashi, and he awkwardly asks what she’s doing, so she tells him she needs to talk. Rashi tells her he can’t at the moment, so Lynette threatens to sing Ethel Merman. Calling her bluff, Rashi refuses to talk to her, forcing Lynette to stand up and sing "There's No Business Like Show Business" at the top of her lungs. Rashi covers her mouth and then drags her outside. Lynette tells Rashi that he cannot leave Lydia. He says he doesn’t want to, and that he didn’t recognize the woman yelling at Lynette. Lynette says that she turns her into that person every time they meet and that she didn’t recognize the happy and in-love Lydia. Rashi then explains it’s hard for him to be around people like Lynette and Lydia, because they remind him of his family. He then explains that his name isn’t Rashi, but it's Herbert Brickmeyer. Lynette tells Rashi that Lydia doesn’t act like a “Brickmeyer” until she “pushes her buttons”. Lynette then asks Rashi to give Lydia time to find her bliss, so Rashi, smiling, says he’ll think about it.

Later, Lydia blissfully announces to her sister that Rashi is taking her back. ("Watch While I Revise the World")

Retrieved from "https://desperatehousewives.fandom.com/wiki/Herbert_%22Rashi%22_Brickmeyer?oldid=77352"
Community content is available under CC-BY-SA unless otherwise noted.