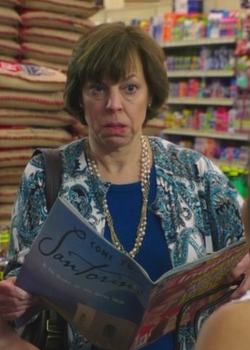 This Housewife was a woman who gossiped about Bree's trial at a supermarket with her friend.

At a supermarket, Gabrielle is waiting in line to buy her groceries. Meanwhile, two women are stood behind her, gossiping about Bree as they read a news article about it. They call her a black widow, and then are shocked to read she slept with 15 men within two months, and was drunk the whole time. They both giggle when they jokingly say it's like college. Gabrielle overhears the women and is angered. She tells them they don't know what they're talking about. She asks if they even know Bree, so her friend explains Bree catered a party for her friend, and she seemed to have "shifty" eyes. This woman reads the magazine and agrees that her eyes are "shifty". Gaby tells the women she knows Bree personally and that she's innocent. This woman's friend explains the police don't arrest innocent people, leading this woman to insist she must have done something. Gaby explains one article doesn't make her guilty, but the friend tells her everyone thinks she killed Ramon. Gaby yells, insisting Bree would never kill anyone, and she'd die if she knew what people thought about her. The friend replies by saying she'll have to get used to it, as the jury will find her guilty and she'll go away for a long time. ("The People Will Hear")

Retrieved from "https://desperatehousewives.fandom.com/wiki/Housewife_2_(8.21)?oldid=80203"
Community content is available under CC-BY-SA unless otherwise noted.