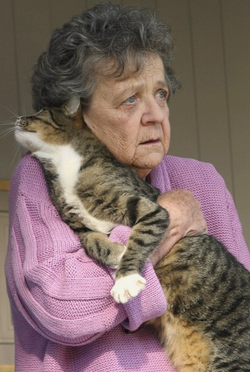 She first appeared in the episode "Come in, Stranger" as a neighbor at the watch-meeting complaining that somebody was watching her whenever she took a shower. She later lets Susan borrow her car.

In season two, we discover that Ida has a drinking problem. But that ends because, when she asks for God to end her alcoholism, her bottle is shot due to an event taking place at Mike's house, and she quits. In the same episode, it is also revealed that Ida attends a Methodist church.

When Mike awakes from his coma, Ida's nephew, Dr. Lee Craig, tells her about this, and she starts spreading the news around Wisteria Lane. Also, when she planned to go on a trip somewhere, in episode 3.06, Susan steals her cab. She also found Karen's dead husband in her house.

In season four, Ida has gotten back to drinking. When a neighborhood meeting is done for elections of the street president, Ida objects against the gay neighbors, not because of their fountain, but because they're gay. During the tornado warning, she takes cover in Mrs. McCluskey's basement with the Scavos, and the house is destroyed due to the tornado. It is soon confirmed she died, telling the kids to hide under the stairs, however there was only enough room for them, so she hid near the corner and didn't survive. After her death, we learn that Ida was a professional baseball player during World War II. Her ashes are scattered by Lynette and Mrs. McCluskey at a baseball field where she had her glory days. Most of her possessions were taken by her relatives. Karen states that they will sell it online. If this statement was true it's unknown.

Retrieved from "https://desperatehousewives.fandom.com/wiki/Ida_Greenberg?oldid=90204"
Community content is available under CC-BY-SA unless otherwise noted.