Start a Wiki
watch 01:22
The Loop (TV)
Do you like this video?
In a World Where the Kings Are Employers 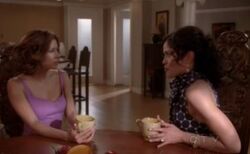 "In a World Where the Kings Are Employers " is the 102nd episode of Desperate Housewives.

Carlos' boss is cheating on his wife. Look for Gabrielle to uncover the truth! Carlos gets a bonus as the Solises cover for the boss.

After learning Bree gave Andrew a raise, Orson confronts Bree. Can Orson get info on Bree's bank account? Not without the password.

Susan begins working at the school. She's angry and jealous when Mike leaves MJ with Katherine.

Some of the residents of Wisteria Lane are beginning to suspect Dave's up to no good. How will Dave react?

Retrieved from "https://desperatehousewives.fandom.com/wiki/In_a_World_Where_the_Kings_Are_Employers?oldid=80007"
Community content is available under CC-BY-SA unless otherwise noted.