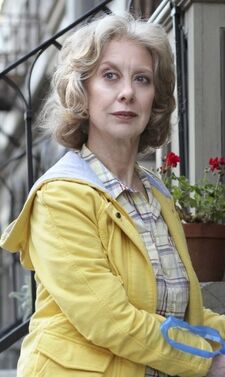 Iris Beckley was a neighbor of Rose De Luca, Angie Bolen's mother, who lived in New York City. Iris was offered $1,000 by Patrick Logan to provide him with info of Angie's whereabouts.

When Angie Bolen and Gabrielle Solis fly to New York to track down their son and niece, respectively, Angie becomes re-acquainted with her estranged mother, whom she had to cut connections with in order to protect her from Patrick Logan, and so that he (or the feds) wouldn't track Angie and her family down via Rose. Iris was Rose's neighbor and friend, and 18 years before, when Angie left Patrick, he had offered to give Iris $1,000 should she ever tell him where Angie was.

Iris notices Angie in incognito visiting her mom, and later asks Gaby who she is. Gabrielle says it's Rose's daughter, who is visiting from Fairview. After they've gone, Iris calls Patrick that time and tells him she knows where Angie leaves, but he will find out when he gives her the money.

Days later, Patrick calls Iris to let her know he's stopping by, and she tells him not to forget the cash. When he comes over, he brings her roses, and they then have tea together. Iris has just revealed to him the town where Angie's setting up home, and apologizes for not getting an address. He thanks her for the info, saying she's done more than enough, and hands her an envelope full of cash. Iris, however, becomes a bit concerned for Angie's sake, because she likes Rose and doesn't want to some day hear that something bad has happened to her daughter. Therefore, she asks Patrick why he wants to track her down, and he claims Angie took something of his, and he wants it back. Patrick can, however, see that Iris is getting cold feet, and worried that she might tell someone, he fakes a break-in inside her home, by wrapping his scard around his hand and breaking the window from the outside, with the excuse of telling her to get her money to a bank because she lives in a dangerous street, and then holds the scarf between his hands and slowly approaches Iris, killing her off-screen.

Retrieved from "https://desperatehousewives.fandom.com/wiki/Iris_Beckley?oldid=85775"
Community content is available under CC-BY-SA unless otherwise noted.