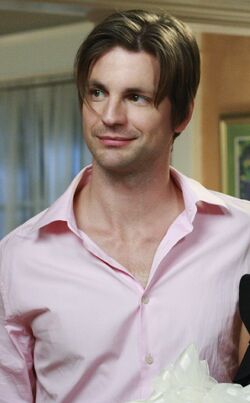 Jackson is first seen at the end of Season 4, when Susan comes home and kisses him, instead of Mike.

It is revealed that Susan is in a "casual" relationship with Jackson, after divorcing Mike.

At first, Jackson and Susan did not want a serious relationship and Susan keeps it a secret, but as the season progresses, he wanted her to introduce him as her boyfriend to her friends. However, Susan does not want to go public but eventually introduces him as her boyfriend. They eventually agree to return to the original state of the relationship. Jackson suffers minor injuries during the fire in Warren Schlling's club, started by Dave Williams. When Jackson moves away during season 5, he invites Susan to come with him. She agrees but later changes her mind so she can be alone for the first time in her life. Eventually, Jackson returns and proposes marriage because otherwise he believes he will be deported to Canada. Dave, who suspects Jackson is a potential witness to his arson, tips off immigration when he finds out that Jackson is there illegally. When Susan and Jackson are about to leave for City Hall to be married, immigration takes him into custody. He is later questioned by the police about the fire, and what he knows about Dave. His current whereabouts are unknown but he told Susan that his deportation papers were being processed.

Retrieved from "https://desperatehousewives.fandom.com/wiki/Jackson_Braddock?oldid=81875"
Community content is available under CC-BY-SA unless otherwise noted.