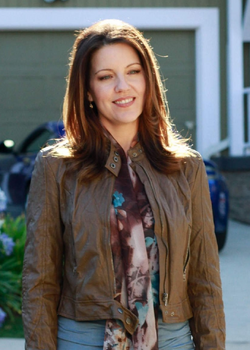 Jane Carlson was Tom Scavo's girlfriend, whom he dated after he and Lynette separated. She works as a doctor and has a daughter named Chloe.

Little is known about Jane's past. Previously she was married but ultimately got divorced. She has a daughter, Chloe Carlson and a niece, Cindy.

Jane is first introduced when Lynette suspects Tom has a new girlfriend following their separation, but she suspects Chloe, who is in fact Jane's daughter. ("School of Hard Knocks")

Jane is next seen when she accompanies Tom to Lynette's house to drop off Penny, where Lynette finds out that she has offered to make Penny's Halloween costume, so Lynette, thinking Jane is trying to upstage her, fakes a story just so she can do it instead. When the costume Lynette quickly orders is innapropriate, Jane steps in to fix the problem and the two ladies go upstairs to sort something out. In Penny's room, Jane realizes Lynette hired someone and they have a friendly laugh about it, with Jane reassuring Lynette that they'd be good friends as helping her out is something that a friend would do. The conversation take a sour turn when Lynette asks as a friend for Jane to back off from Tom and a short row escalates with Jane vowing not to give up on Tom as he told her throughout the marriage Lynette was always looking for a fight which was what her ex-husband was like and now she's found someone who isn't like that (Tom), she wants to hold onto them. ("Witch's Lament")

Jane and Tom continue to spend time together, leading Penny to suspect they will eventually get married, worrying Lynette. Jane continues to bond with Penny, claming that they're "twins" with matching hair and nicknaming her "zuzu". Later, Penny picks up on the fact that her mother doesn't like Jane, but Lynette responds that she never said that, she thinks Jane is nice and seems a like a person who can always get what she wants, including other people's husbands. Lynette tries to coy a way of indirectly leading her daughter to believe that Jane isn't a nice person, although she rebukes her comments later on. ("Always in Control")

When Lynette receives flowers she believes Tom wants to get back together so she sneaks into his flat and leaves a present but when he returns with Jane in tow she hides underneath the bed. As Tom and Jane are about to have sex, Lynette reveals herself, shocking both Tom and Jane. Jane announces she'll be at Chloe's to give the pair some privacy and leaves. ("Suspicion Song")

Jane and Tom organize a romantic trip to Paris, but Lynette needs to tell Tom about her involvement in Alejandro's murder, so she gets Chloe to give her the flight details. Tom and Jane wait for the flight and Jane and Tom says the champagne reminds him of a holiday with Lynette. Jane awkwardly asks Tom to stop talking about Lynette, so Tom apologizes and says he has old habits. He then assures Jane that it’s the last she’ll hear of Lynette, however, Lynette suddenly comes running through the airport. Tom and Jane then kiss, which sickens Lynette. Lynette tries to catch a moment with Tom, so she follows him to the men's room, they talk but Jane intervenes and is again shocked to find Lynette following them. Lynette apologizes for what the situation must look like, angering Jane because she thinks she’s chatting Tom up. Tom backs up Lynette, so Jane sarcastically admits that she’s the crazy party, before leaving the toilets and scolding Lynette, she gives Tom a boarding ticket and asks him to meet her in Paris should he change his mind about going with her. ("Putting It Together")

Jane returns from Paris with Tom, she is next seen attending Penny's birthday party, which Lynette protests to her coming. She brings along her photographer niece Cindy, which Lynette thinks is another attempt at trying to upstage her. After many failed attempts at trying to get a photo of just her and Penny, Jane decides to talk to Lynette inside, who keeps jumping into their photos. Another row breaks out between the pair with Jane mistakingly revealing that Tom has asked her to move in with him, upsetting Lynette. Later, Jane returns to apologise and they row again when Lynette cannot forgive her, Jane helps herself to some crisps as Lynette criticizes her while doing the dishes. Jane is about to leave but begins choking on a crisp, she slams the table to get Lynette's attention for help. Lynette hesistates, but eventually comes round to doing the Heimlich Maneuver on Jane. Jane, who is angry that Lynette didn't act fast storms out. ("You Take for Granted")

Jane accompanies Tom to Mike's funeral, much to Lynette's dismay. ("Women and Death")

In order to try and win Tom back, Lynette and Penny devise a plan. Penny asks her mother to take her to a Taylor Swift concert, but Lynette declines. Jane notices how upset Penny is by this, and she offers to take Penny to the concert herself. Penny is pleased, but just because her plan had worked. Tom and Lynette would now be able to spend a night alone and reconcile. After Lynette and Tom's night together seemed to end badly, when Jane offers sex to Tom, he declines, saying he has work... but it appears that he still has feelings for Lynette. ("Any Moment")

Jane doesn't understand Tom's reason for hitting his boss and getting fired. It later becomes apparent to Jane that Tom still has feelings for Lynette, and she becomes upset when he doesn't even deny the claim. She accuses Tom of using her as a distraction so he couldn't let his true feelings for Lynette be shown. She then ends her relationship with Tom, telling him that he broke her heart and, even if it didn't matter, she loved him all along. She later packs her belongings and leaves the apartment. ("The People Will Hear")

1 of 33
Add photo
Retrieved from "https://desperatehousewives.fandom.com/wiki/Jane_Carlson?oldid=84532"
Community content is available under CC-BY-SA unless otherwise noted.