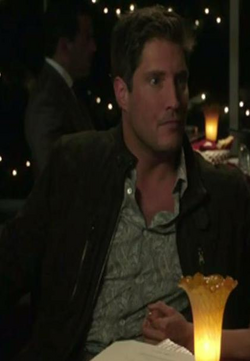 Jason is one of Gabrielle Solis' many male customers at Cumberly's. He runs into her and her husband at a local restaurant.

Gabrielle and Carlos Solis are at a fancy restaurant and the waiter is giving them the menus. Gaby takes the whine list, and tells the man to bring her the check, as tonight it is her treat. Carlos looks at the list and tells her it's kind of pricey, and they should be saving for Bree's lawyer. Gabrielle tells him they are, but she's started doing really well at her job and thus she thinks they can afford one splurge. Carlos is unsure, but Gabrielle asks him to just enjoy this as she wants to do it for him. Carlos smiles and says he can do that, and as they lean towards each other for a kiss, a man calls out for Gaby. She pushes Carlos away as Jason makes his way to her. Gaby gets up as the attractive young man picks her up in his arms and Carlos is not happy to see this. He asks Jason who he is, and Gabrielle introduces him as one of her clients. She then introduces Carlos to Jason... as her 'brother'. Jason reaches out his hand at Carlos, who gets up and shakes it, none too happy. Gaby tells Jason to grab a chair and join them, which he does, and everyone sits down. Gaby gets out her wedding ring and slips it to Carlos, who gets even more infuriated.


Jason then takes the opportunity to tell Carlos that his 'sister' is quite the saleswoman, and just that day she convinced him to buy a $4000 suit. Gabrielle suggests that Carlos head to the bar and get them some drinks, but he tells her he's not thirsty. Jason then points out to Gaby that he's wearing one of the shirts she picked out, and asks her what she thinks. Gaby jokes that she can't tell him what she thinks in front of her brother. Carlos gets even madder. Jason asks Carlos how it is possible that someone as awesome as his 'sister' hasn't been 'scooped up' already. Gaby chuckles and Carlos says, "My guess is it's the herpes." Jason and Gaby are both shocked, and Gaby rubs this off as 'sibling humor' and gives Carlos a playful punch. Carlos then adds that she might be right, as all those trips to the free clinic could have been for anything. Gabrielle forcefully hints at him to go and get some drinks for the table, and Jason tells him that he'll take a scotch on the rocks, single malt. Carlos, having reached his limit, tells Jason he's gonna have to get that himself, as he's leaving, to go home to his wife, because he's married - which he makes clear by showing his ring to Gabrielle. He leaves, and Gabrielle is unsure of what to do.
Outside the restaurant, Carlos is waiting for the valet when Gaby comes near him and lashes out at him for having done that, as Jason is one of her best customers. Carlos asks if she's talking about that 'nerd' she sells to (an allusion to her comment that her clients are all nerds with money), and Gaby tells him that Jason might be better-looking than the others, but it's her job. ("With So Little to Be Sure Of")

Retrieved from "https://desperatehousewives.fandom.com/wiki/Jason_(8.19)?oldid=86626"
Community content is available under CC-BY-SA unless otherwise noted.