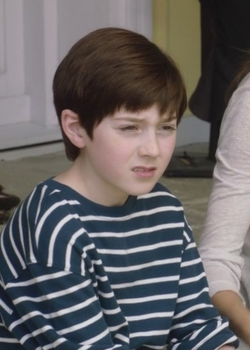 Jasper Zeller is the son of painter, Andre Zeller.

At the art school, Andre is walking towards his classroom as Susan runs behind him, carrying heavy bags and art supplies, saying “intern Susan Delfino, reporting for duty”. Andre mumbles that he’s starting to regret choosing Susan, but then she thanks him for picking her. They then enter the room to find a young boy, Jasper, sitting at a desk, reading a book. Andre introduces them both, and then he tells Susan that he’ll pick him up on Monday night. Susan says she doesn’t understand, so Andre explains that Jasper is his son and she’s watching him for the weekend. He goes on to list the allergies that Jasper has, but he says he cannot remember one of them, shocking Susan. Susan then asks if Andre was married, so he explains that he was young and he needed money. As Andre leaves, Susan asks if he only chose her to be a glorified babysitter. Andre explains she isn’t, as the school are calling it an internship, so that's way he doesn’t have to pay her. Andre then leaves an unhappy Susan with his son, so she awkwardly asks him what he’s reading. He tells her it’s a book containing tips for surviving a nuclear attack, making it apparent to her that he is just as pretentious as his father.

Over at Susan’s house, Susan is in the kitchen with Jasper, who’s reading a book. As she pours candy into a bowl, she asks if he wants to play video games, but he scoffs her suggestion. So, she asks if he wants to carve a Jack-O’-Lantern... which doesn’t have any more effect as he states he’d rather stick a knife in his eye. Susan awkwardly mumbles to herself that there’s thirty-six more hours to go, but Jasper, who heard her, points out there’s thirty-seven hours, as Andre is always late. MJ then comes down the stairs, wearing a space-robot costume, and he shows his robot impression to his mother; Jasper rolls his eyes at him. Susan tells MJ, in a robot voice, that his costume is “approved”. Jasper tells them both that they sound stupid, so Susan, still talking in the robotic voice, says his insult does not “compute”. Jasper then yells that nobody cares about being a “dumb robot” and he charges out of the house and onto the front porch. Moments later, Susan joins Jasper on the porch. She asks him what’s going on with him, so he tells her he hates Halloween. She asks why, as it’s merely about dressing up and getting free candy, but Jasper just shakes his head. Something then occurs to Susan, and she asks if Andre doesn’t let him celebrate Halloween. Jasper says his father thinks it’s for kids, so Susan reminds him that he is a kid. Susan then tells Jasper that he and Andre are both going trick-or-treating with her and MJ. Jasper says Andre will never accept, but Susan says she can be very persuasive.

On the lane, Susan, dressed as a fairy, and Andre are both walking together as MJ and Jasper trick-or-treat. Susan says he’s one good wig away from being the Cowardly Lion. Andre tells her to “drop it, witch”. Susan laughs and asks him to say “I do believe in spooks” in the Cowardly Lion’s voice. However, Andre reminds her that he’s only with her because she kidnapped his painting. MJ and Jasper then return from Bob and Lee’s house and they show their candy to their parents. Jasper offers a chocolate bar to his father, but Andre says the only thing he wants is to go. Jasper explains that they’ve only done half the street, but Andre tries to bribe Jasper into leaving with $20. Susan tells Jasper he’s joking and tells him to continue. As the kids leave, Jasper says “I promise I’ll go fast, Andre”, surprising Susan. ("Witch's Lament")

Retrieved from "https://desperatehousewives.fandom.com/wiki/Jasper_Zeller?oldid=67954"
Community content is available under CC-BY-SA unless otherwise noted.