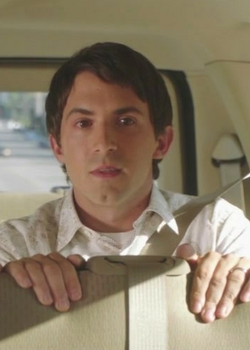 Jeff is a young newlywed seen in the back of the shuttle Gabrielle Solis stole i the eighth season premiere.

After Gabrielle steals the shuttle that was supposed to drive Father Dugan to the airport, in order to get him to hear her husband's confession, she hears someone saying "Excuse me.", and she is startled. In the back of the van, we see a young couple. Gaby asks where they came from, and the man, Jeff, tells her they're going on their honeymoon, whereas the woman, Ally, adds that they can't have any detours, as it is said that they have to get to the airport three hours early to catch international flights. Gaby says "Oh, honey, relax. Since we caught Bin Laden, you can stroll on the plane anytime you want."; as she keeps driving, Father Dugan gives her a weird look. ("Secrets That I Never Want to Know")

Retrieved from "https://desperatehousewives.fandom.com/wiki/Jeff_(8.01)?oldid=84355"
Community content is available under CC-BY-SA unless otherwise noted.