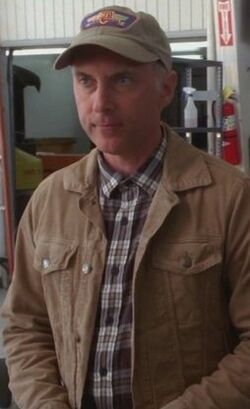 Jeff Bicks was a pilot-for-hire. He had a very temperamental relationship with his wife, Daphne, believing her to be a very narcissistic and moany woman.

He was hired by Karl to fly over Wisteria Lane Park with a sign reading: "Will you marry me?" directed at Bree. After a brutal argument in the air with his wife in which they both agreed to divorce he suffered from an heart attack while on the job. His wife attempted to take control of the plane and land it with help from an emergency source, but ultimately failed, crashing it on Wisteria Lane during their Christmas celebrations, which ended up killing Karl, putting Orson in a wheelchair, killing one of Lynette's unborn children and threatening the life of Celia. ("Boom Crunch")

Jeff, if he was not killed by the heart attack, was killed during the collision. ("If...")

Retrieved from "https://desperatehousewives.fandom.com/wiki/Jeff_Bicks?oldid=89966"
Community content is available under CC-BY-SA unless otherwise noted.