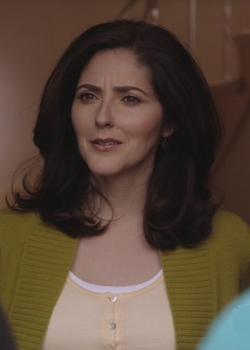 Jennie Hernandez is a care provider who worked at the autistic persons' care home and looked after Laura Delfino, Mike Delfino's sister.

After Mike Delfino passes away, his widow, Susan, and her friend Lee McDermott, discover a box of his, amongst his belongings, that contains a checkbook with checks he'd written for Jennie Hernandez, along with drawings seemingly made by a child. Susan is under the impression that somewhere out there Mike had a child.


Susan decides to pay Jennie a visit. She prepares to knock, but then hesitates. Julie, who is standing beside her, tells her it's gonna be okay. Susan builds up the courage to knock, and Jennie opens the door for them. Jennie asks who they are, and Susan introduces herself as Mike's wife. Jennie tells her she is so sorry for Susan's loss, and Susan thanks her for her sympathy. Susan then tells her that what she needs from her, though, is an explanation, as to why Mike was sending her cheques every month. Jennie tells her the cheques were for Laura. Susan asks if Laura is Mike's daughter, and Jennie tells her... it's Mike's sister.


Shortly afterwards, Susan and Julie are inside the house, talking to Jennie, and looking over at Laura Delfino, Mike's sister, who has autism, and who is seen painting what appears to be a bowl. Julie asks Jennie if this is a group home, and Jennie explains it's a home for autistic adults, and Laura is one of their more severe cases, as she can't speak. But she loves painting, and spends hours everyday at the table where she is sat. Julie asks if Mike ever mentioned having a sister. Jennie tells them Mike was great with Laura, and came by every Monday night to visit. Susan recalls that he would tell her he had softball. A phone is heard ringing, and Jennie asks to be excused, and leaves. Susan says that this is crazy, and Julie explains to her that this is good, because there is no other woman and no other child. Susan wonders why her husband wouldn't tell her he had a sister, and Julie says she doesn't know. Susan wonders if he thought he'd be upset about the money, because she wouldn't. Julie says she's sure he knew that. Susan can't help wondering why he hid this from her, asking herself if he thought she wasn't the kind of person that would accept Laura. Julie doesn't know what to say, and they are interrupted by a returning Jennie, who asks them if they would like to meet Laura. After a brief reluctance, Julie tells her, with a smile, that they would love to. Jennie and Julie head in Laura's direction. A frustrated and confused Susan takes her time, but ultimately follows them. ("With So Little to Be Sure Of")

Retrieved from "https://desperatehousewives.fandom.com/wiki/Jennie_Hernandez?oldid=77689"
Community content is available under CC-BY-SA unless otherwise noted.