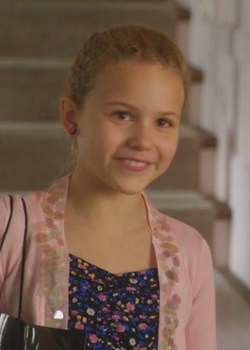 Jenny Hunter-McDermott is the adopted daughter of Bob Hunter and Lee McDermott, a same-sex couple who live on Wisteria Lane.

Jenny is an orphan that, according to Renee, was thrown from one foster home to another.

She had no stable parents or family for a long period of her life until Bob and Lee met and adopted her at age 10.

Bob and Lee, while at Gabrielle and Carlos's house decide to tell them about their newly adopted daughter. However, the mention of the girl deeply upsets Gabrielle. ("Where Do I Belong?")

Later, Bob and Lee seek the help of Lynette and Renee to design the interior for Jenny's new bedroom.

After Bob and Lee pick her up from the airport, they take her to meet Renee first out of everyone on the Lane. She and Bob leave, and Renee tells Lee she was cute. Lee then asks Renee if she'd act like a mother figure for Jenny, which she says she would. ("I'm Still Here")

One day, Gabrielle is walking past Bob and Lee's house when she sees Jenny practicing her violin with Lee for her school's talent show.

Gabrielle visits the house and points out that Jenny has been practicing a lot. Lee tells her that he and Bob were ensuring she practices all the time to make sure she had clear goals.

It is then revealed that Lee had also been teaching Jenny Mandarin Chinese as she requested.

Gabrielle disagrees with their parenting technique, but Lee gives her doubts to letting her child do whatever she want.

On the night of the talent show, Gabrielle sees Jenny practicing her violin last minute with Bob and Lee.

She then enters the stage with all the other performers when they were about to start. At the end of the night, Jenny is the closing act.

As she performs her song, she hits a few wrong notes, much to Gabrielle's pleasure. However, when she finishes, everyone cheers her and Lee even runs onto the stage to celebrate with her.

Gabrielle tells Bob that Lee must have felt awkward because of the mistakes, but Bob explains that Jenny had trouble hitting the correct notes in practice and because she still performed, they are very proud. This shames Gabrielle into letting Juanita perform. ("Searching")

Jenny developed the need for bras, but Lee was too scared to buy them for her, so he asked Renee to go shopping with Jenny.

The two bonded as they shopped, and they even bought some make-up and new clothes for Jenny.

When they came back late, Lee wasn't happy and he seemed jealous by Jenny's new relationship with Renee.

Later on, Jenny was doing her math homework in Renee's room. She questioned why she needed to learn fractions because she'd never have to use it in real life.

Renee explained that when she got a divorce, knowing her fractions got her extra money.

Lee then barged into the house looking for Jenny. He told her she was late coming home, so he grounded her. Jenny yelled, saying he was embarrassing her and then she ran home crying.

A little while later, Jenny broke in to Renee's house. Lee came looking for her and eventually found her.

She told him that she liked being at Renee's house because she thought it was be nice to have a mom.

Hurt, Lee asked why she wasn't happy with two dads, so Jenny explained they can't do the little things with her, like go to the bathroom. Lee then promised that he'd start doing more "motherly" things with Jenny to please her.

Renee then sent Jenny to read some magazines while she comforted Lee, telling him that her wanting a mother is only temporary. ("Watch While I Revise the World")

Retrieved from "https://desperatehousewives.fandom.com/wiki/Jenny_Hunter-McDermott?oldid=87960"
Community content is available under CC-BY-SA unless otherwise noted.