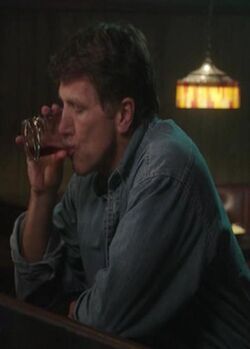 Jerry is one of alcoholic and promiscuous Bree Van de Kamp's many sexual partners, one she met twice at her favorite local nightclub.

Bree is at her favorite bar, sat at the counter, having a drink, when she notices a rugged blue-collar man, also drinking at the counter. She gets up from her set and sits down next to him, bringing her drink with her, and telling him, with a smile, that she doesn't usually do this but she's feeling rather bold that night. "Can I buy you a drink?", she asks. The man, smiling, says "Sure." Bree has the bartender serve him, and then asks him his name. He says he's Jerry, and Bree tells him it's nice to meet him. He remains quiet, and she jokes that he's not much of a talker, which is alright, because she'll ask all the questions. She asks him what he does for a living, to which he replies, "I'm a roofer. Same thing I was two nights ago... when you took me home." Bree is confused and surprised by this remark, and she takes a better glance at him and is suddenly reminded of the man. She quickly apologizes for not having recognized him, making up excuses, and he tells her that's okay. With things on good terms for them, Bree tells him she won't forget him twice, and then asks if there is any way she can make it up to him. Jerry tells her that he does remember the other night, so yes, there are several ways. Bree chuckles and caresses him, before suggesting that they don't waste any time. Shortly afterwards, Bree is seen leaving the nightclub with Jerry... from the inside of a car. Someone is still watching her.
Retrieved from "https://desperatehousewives.fandom.com/wiki/Jerry_(8.13)?oldid=77324"
Community content is available under CC-BY-SA unless otherwise noted.