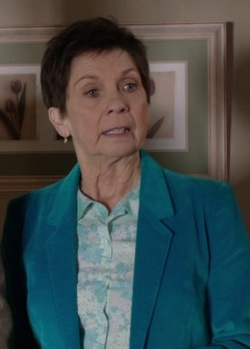 Jill Newman is a middle-aged woman and one half of the couple Lee McDermott once showed Susan Delfino's house to, with the intent of selling it.

Susan is in seen in her kitchen one morning, sipping a cup of coffee, as Lee parades a middle-aged couple (Jill and Fred Newman) around the house, and telling them that this 'gem' just became available in the market, and describes it as a warm, cozy and homey place (he then adds that the owners are taking the furniture, so as to keep the couple from being worried).

Jill tells Susan she loves her kitchen, and Susan thanks her, with a smile, and starts going on about the many mornings she sat there, looking out at the lane and having a cup of... "Gaby!", she says, to Lee's surprise, as their friend Gabrielle Solis makes her way to the house, and Susan points out to Lee that she hasn't told Gaby she's moving yet. Lee suggests to the couple that they head upstairs, and Fred tells him they're not done looking downstairs. Susan tells them the upstairs is way better, as it's closer to Heaven.She rushes them, and Gaby barges into the house, and Susan asks how she's doing. Gaby tells her she's great, but it was her turn to look after Mrs. McCluskey, which obviously means she's been drinking. She asks Susan to take her to the courthouse, to which her friend replies "Sure." Gaby overhears something in the upper floor and asks if someone is upstairs as Susan is trying to rush her out, but a female voice is heard saying "Look at this closet space." Gaby is intrigued, and Susan comments that it is just some old friends from high school. A male voice is heard asking if the toilets are low-flow. Susan adds that they are very eco-friendly. Susan then says she should get back to her friends, and that she'll pick Gaby up at noon. The couple, however, comes downstairs, and Fred comments that Susan has a great place. Susan awkwardly introduces Gabrielle to her 'good friends', Fred and "Jean". The elderly couple is confused, and Gaby tells them hello and mutters to Susan "What year did you graduate?". All Susan can do is give her a smile. ("Give Me the Blame")

Retrieved from "https://desperatehousewives.fandom.com/wiki/Jill_Newman?oldid=70877"
Community content is available under CC-BY-SA unless otherwise noted.