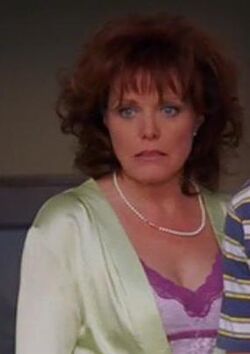 Joan Novak was a Fairview resident who engaged in an affair with gardener John Rowland.

Gabrielle Solis, John's ex-lover, drives up to some neighborhood on her new Aston Martin, and checks out John trimming some bushes with an electric chainsaw. She gazes at him with apparent anxiety, until she notices a middle-aged red-headed woman, Joan Novak, coming out of the house. Mrs. Novak starts stroking John's back and gestures at him to come inside. John does, and Gabby is very surprised. She gets out of her car and heads for the house as well. She then looks through the window, sneakily, and is shocked by what she sees. We hear moans coming from inside the house, implying John and Joan are having sex. An infuriated Gabrielle starts to leave, until she notices the chainsaw, takes it and turns it on. Moments later, when John and Joan get out of the house (with the latter dressed in a robe) and kiss, Gabby watches from her car, and then drives off with a smile. John and Mrs. Novak turn to the front yard and are both shocked to see that the woman's flowers have all been cut off from their vases.

Some other day, Gabrielle walks out of her house to get the mail when John Rowland is seen getting out of his truck and walking up to her, asking "It was you, wasn't it?". Gabby says "Hello, John. Long time, no see.", and John tells her that one of the neighbors said he saw an Aston Martin driving away... much like the car Gabrielle has parked outside her house. Gabrielle tells him someone had to tend the yard, as he was busy elsewhere. John asks if she saw them, to which Gabrielle replies that she did, and then she adds that the woman is old enough to be his mother, and even old enough to be her mother. John says that Joan is only 41. "Joan? You're calling her Joan?", she asks, and John asks why he shouldn't, considering they're friends. Gabrielle tells him she knows his friends, and he doesn't do to his friends what she saw him doing to that wrinkly old lady. John stops her from getting back inside the house, positioning himself in front of her and asking what the big deal is with her catching him "doing it" with somebody else. John then says he realises it may seem quick, but he's got feelings for Mrs. Novak, and he might actually be in love with her. He later asks her if she's upset because she wants to get back together. He says that he can break up with Joan. However, the two of them never hook up again, and it is unknown whether or not John and Joan do.

Retrieved from "https://desperatehousewives.fandom.com/wiki/Joan_Novak?oldid=77690"
Community content is available under CC-BY-SA unless otherwise noted.