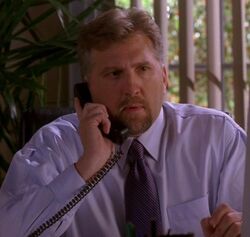 Joe Flannery is an insurance agent who worked in Claims and was in charge of Rex Van de Kamp's will.

At the hospital, Dr. Lee Craig and Joe Flannery are seen walking together, and the latter explains that he's worked in the insurance industry for 15 years and yet he's never received a phone call like that. Dr. Craig explains to him that he's having second thoughts about Rex's death. He adds that he's known Rex and his wife Bree for nearly 20 years and he's never had any reason to suspect they were anything but a happy, loving couple. He hands Mr. Flannery a note and tells him that's exactly why this seemed so strange. Mr. Flannery opens the folded piece of paper and reads it: it's the note Rex wrote to Bree. Dr. Craig tells him he found it in Rex's room after he coded. "I forgive you", reads Mr. Flannery, with surprise.

One day, Bree's mother-in-law, Phyllis Van de Kamp calls him over the phone. He answers it with "Claims. This is Joe Flannery.", and Phyllis asks him if she could speak to someone about the death benefits for Rex Van de Kamp, as this is her mother speaking. Mr. Flannery looks put out, and tells her that he already spoke to Rex's wife and they are moving as quickly as they can. Phyllis promptly asks him "Are you aware that my daughter-in-law has a boyfriend?". Mr. Flannery prepares to take down some notes as he says "I'm listening."

Later, Joe is seen snapping some photos at night of Bree sharing a laugh with her friend George Williams.

Retrieved from "https://desperatehousewives.fandom.com/wiki/Joe_Flannery?oldid=86925"
Community content is available under CC-BY-SA unless otherwise noted.