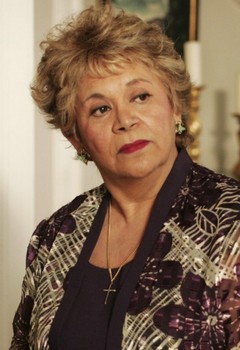 Juanita Solis, simply known by most as "Mama", was the mother of Carlos Solis. When she moved into the Solis house to act as a spy on Gaby, she discovered her affair with John Rowland, but was soon run over by a drunk Andrew.

When Juanita was sixteen, she married Diego Solis and had her son Carlos. Diego became abusive to Juanita and Carlos and Juanita eventually had enough of it. Juanita "made sure Diego payed for his actions". Juanita told Carlos that Diego left their family for a waitress at a truck stop dinner. Ever since that day, Juanita made it her main goal in life to protect her son. ("Come in, Stranger")

Years later, Carlos becomes engaged to Gabrielle Marquez but Juanita thinks she's a gold digger and only wants him for his money. Juanita and Gaby clash because of this but Carlos refuses to leave Gaby. Juanita is furious when Carlos buys Gaby a wedding dress that costs more than Juanita's first house. ("Women and Death")

Carlos Solis calls his mother, Juanita for a visit because he thinks his wife Gabrielle Solis is having an affair but he doesn't know with who. Gabrielle is furious to see Juanita coming for a visit. Juanita keeps Gaby company 24/7 which starts to irritate her since she can't see her lover, John, with Juanita around. However, while Juanita is watching one of her Mexican soup operas, Gaby sneaks out to have sex with John at a hotel. ("Come in, Stranger")

Juanita plays a poker game with her daughter-in-law's friends, Susan Mayer, Lynette Scavo, and Bree Van de Kamp. Juanita wipes the three ladies dry. Gaby tells Carlos about this and he reveals that Juanita has a major gambling problem. Gaby uses this to her advantage and drops Juanita off at a casino while she goes to have sex with John. Gaby picks Juanita up and finds out Juanita maxed out Carlos's credit card and is now in debt $150.000.00. Gaby helps Juanita keep this from Carlos. Juanita see's that Gaby loves Carlos and tells Carlos she thinks Gaby might not be having an affair. Moments later however, Carlos tells Juanita he warned Gaby about Juanita's gambling addiction. Juanita starts to see how Gaby tricked her. Then she notices how Gaby passes John as she walks into her house and Juanita knows that Gaby and John are having an affair. ("Running to Stand Still")

Gaby and John plan to have break up sex when John is upset with Gaby. Gaby tells Carlos she is sick and can't go to his business dinner so Carlos takes Juanita instead. While Gaby and John are having sex, Juanita buys a disposable camera and rushes home to catch Gaby in the act. Juanita catches John and Gaby and takes a picture while saying "Smile Gabrielle". Juanita rushes down the stairs while John tries to stop her. Juanita and John trip but Juanita gets back up and runs out the door. As Juanita runs to her taxi, she is hit by a driver who continues on and is left unconscious. Gaby goes to see if Juanita is okay and when she see's Juanita is asleep, Gaby takes the camera from Juanita and destroys it. The hit-and-run driver is revealed to be Bree's son, Andrew Van de Kamp because he was drunk driving on his way home to apoligize to his mother. ("Anything You Can Do")

It is revealed that Juanita is comatized and it is uncertain that she will live. Carlos spends a lot of time visiting his mother. John comes by to visit and wants to confess to Carlos but Gaby won't let him. ("Guilty")

After being in a coma for several months, Juanita finally wakes up and walks through the hospital looking for someone to get her home so she could tell Carlos about Gaby's affair. While running down a flight of stairs, she trips and falls and dies. Juanita tells the nurse to tell Carlos about Gaby's affair but the nurse had ear buds because she was listening to music and didn't hear Juanita. ("There Won't Be Trumpets")

Carlos throws his mother a lavish funeral which Susan, Lynette, Bree, and Edie also attend along with friends and family. Carlos had a horse-drawn carriage for Juanita and a crypt. Carlos and Gaby fight over the expenses this will cause them and as they walk away from the croud walking to the crypt, Bree Van de Kamp leads everyone in Gaby and Carlos's absences. ("There Won't Be Trumpets")

Although not physically appearing, Juanita is mentioned by Bree to Orson when Bree is being blackmailed by Sam Page. Orson is outraged that Bree covered up Andrew's hit and run, but made him turn himself in when he hit Mike Delfino. This causes Bree and Orson's marriage to come to an end. Bree later decides to tell Gabrielle and during Mary Alice's final narration of the season, Bree calls Gabrielle aside and tells her the truth.

Although not physcially appearing, Juanita plays an important role in this season. Gabrielle cries when Bree tells her, but not because she's mad at Bree and Andrew. She's upset because if they tell Carlos, then he'll be mad and she and Carlos are finally happy. Bree and Gabrielle agree to keep it a secret. Bree accidentally backs into Gabrielle and Carlos's daughter Juanita Solis and Juanita is admitted into the hospital. Gabrielle jokingly accuses her of "trying to get rid of every Juanita Solis."

In Moments in the Woods, Andrew decides to tell Carlos the truth when he and Carlos go to a cabin in the woods. Bree and Gabrielle worry about what Carlos will do to Andrew and rush to the cabin. Once there, they think Carlos has killed Andrew. Freaking out, Bree apologizes to Carlos about Andrew killing his mother and admits she helped get rid of the car, just as Andrew walks into the cabin. Unable to leave because of a storm, Bree, Gabrielle, Carlos, and Andrew are forced to stay all night in the cabin. The next morning, Carlos is gone and Bree, Gabrielle, and Andrew track him down in the cemetery at Juanita's mausoleum. After a talk, Carlos forgives Andrew for "killing" his mother, (though it should be noted that Juanita died falling downstairs and the hospital gave Carlos and Gabby a large amount of money so they wouldn't get sued for their negligence.) Bree later goes to the Solis house with her signature basket of muffins, only to be turned away by Carlos. Carlos tells Bree she is no longer welcome, while Gabrielle begs her husband not to do this.

After Carlos kills Alejandro, Bree comes up with the idea of hiding the body. Carlos forgives Bree.

When Susan Delfino decides to leave Wisteria Lane with her children, MJ Delfino and Julie Mayer, and granddaughter, Juanita's ghost appeared alongside George Williams and Mona Clarke, in front of 4362 Wisteria Lane, and they watched the family as they drove away from the lane and began their new lives together. ("Finishing the Hat")

Retrieved from "https://desperatehousewives.fandom.com/wiki/Juanita_%22Mama%22_Solis?oldid=89638"
Community content is available under CC-BY-SA unless otherwise noted.